Add anything here here or just remove it..
By Eagle Rock,
February 13, 2019Leave a commentEagleServe

Change can often be a good thing, and such was the case last month when we switched up our traditional two-day Eagle Serve program for something new: tasking our students to put in the time, energy, and resources in order to benefit the local community in a new and profound way. In previous trimesters, Eagle Serve challenged returning Eagle Rock students withthe importance of being of service to others through participation in open enrollment courses that drive home the idea of “giving back to the community”— especially for students we believe can become the nation’s future leaders and/or active citizens within their own communities.

But this time around, we partnered up with about 40 students from nearby Estes Park High School  interested in participating in an intense, two-day intercultural conference that we called The Necessity of Exploration. And while the goal of being of service to others hasn’t changed from prior trimesters, we did alter how this is being done.

In order to achieve this, we found it necessary to remove the ignorance over social and cultural issues affecting our local community, and to prepare our students to be of service to others by first recognizing their role in diversified communities. By raising awareness and holding courageous conversations with peers from a local school, our students discovered and uncovered what is missing and what must be done to truly serve others.

So, for two full days last month — Jan. 17 and 18 — students from both schools joined together at the Estes Valley Community Center in hopes of understand and honoring our differences and then exploring and embracing our similarities, thereby becoming active participants in a democratic society.

The event was hosted by Emily Bochenek, a Special Education Teacher at Estes Park High School, and Dr. Courthney Russell, Jr., Eagle Rock’s Residential Life Program Coordinator and Aspen Houseparent. Together with staff members from both schools, these two educators created the atmosphere, charging students with becoming “agents of change instead of spectators.”

As for Learning Targets, students at both schools were asked to consider and work toward proficiency related to four specific outcomes:

During the first day of the conference (Thurs., Jan. 17), students from both schools collectively discussed and formulated group norms, as well as learned about physiological issues that could arise from such discussions. This was followed by various community building activities, as well as a video from “The Representative Project” that identified citizens who are actually represented in society and those who are forgotten. 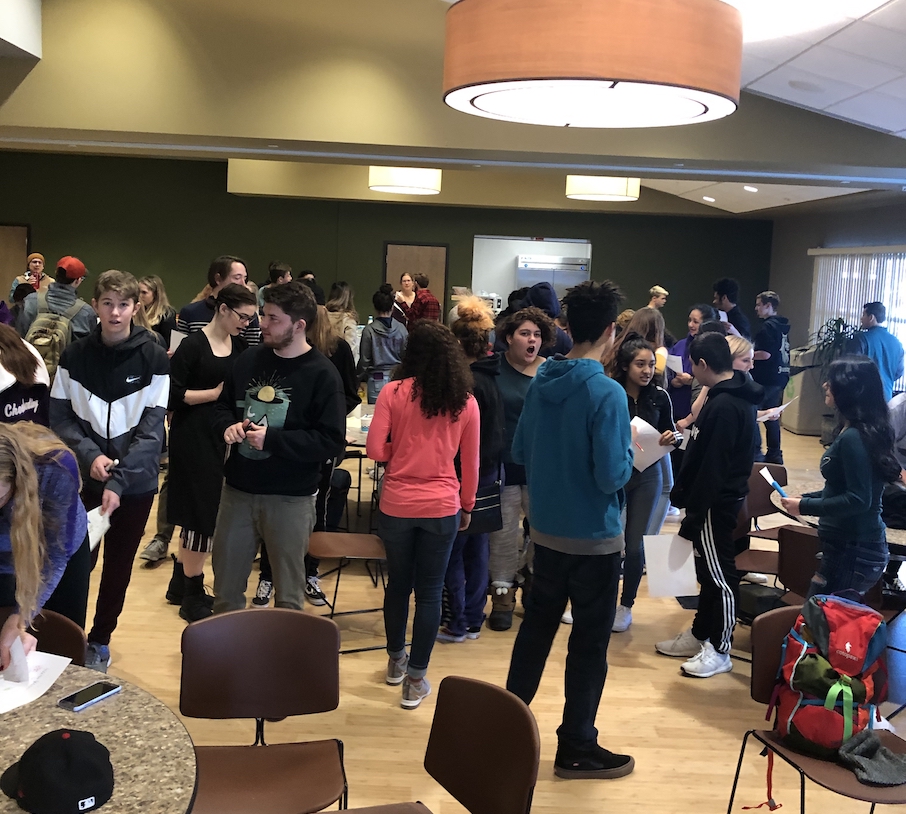 A late-afternoon session — called the “Privilege Beads” — demonstrated what privilege is, who benefits directly from it, and who does not benefit. The issue was raised as to what defines the responsibilities of the privileged. Learn more about Privilege Beads exercise by downloading this PDF document from DifferenceMatters.org.

Friday’s sessions began early and focused on facilitating students from both schools in what can be best described as “courageous and critical” conversations. For example, one session saw students divided into three rotating stations — Gender, Race, and Immigration — wherein dialogue ensued about life in those stations of society versus others. In another session, “Walk the Line,” students were asked to remember experiences they had where they may have been treated badly or unkindly. You can read about Walk the Line (also known as Cross the Line) in this activity overview from The Teachers Guild.

The two-day conference ended with Bochenek and Russell urging the enlightened students to “Not be spectators, but true activists.” Being an agent of change, they were told, takes intentionality and hard work.

To celebrate the successful gathering, students from both schools suited up for an impromptu basketball game and took the time to talk with one another about the two-day event. And participants from both sides said they were eager to attend what is expected to become an annual event.