Add anything here here or just remove it..
By Eagle Rock,
May 13, 20152 CommentsProfessional Development Center 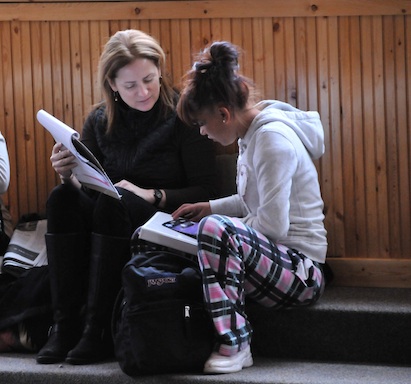 Myles worked on the assets inventory in order for WMHS educators to see where their students are in terms of learning aspects of well-being. This meant that he observed classes, hallways, and the cafeteria to see demonstrations of well-being. He also interviewed a number of students to ask them in which elements of well-being they had experienced success.

Myles was an invaluable asset to our Professional Development team, and his work helped advance the transformation working to support at WMHS.

Like Myles’ work in Vermont, Cha’Asia and Cristian worked on assets observations and appreciative interviews. They also observed elementary school students’ news reports, touched fish eyes in a biology class, and heard about great student projects such as making biodiesel and a deer stand.

Their day’s work resulted in a 34-page report that was presented to the school’s Competency-based Education team; a report that was met with great interest — and many questions and comments — and can now serve as key information for Van Meter to determine its next steps towards achieving their objectives.

In preparation for the focus groups, the Eagle Rock students underwent intensive Qualitative Analysis training that totaled eight hours over several days. As a result, they learned how to conduct interviews by asking probing questions rather than leading questions.

They also learned the power of body language, vocal tone, and active listening techniques. In addition, the students learned to interview in teams and take thorough notes of the interviewees in order to collect qualitative data.

Prior to the trip to New Mexico, the student participants interviewed some of their peers at Eagle Rock, giving them the opportunity to hear the stories behind the success of the students’ experiences at their very own school.

Some of our students have told us the biggest gains they received from participating in our Professional Development Center’s work — beyond the skills sets — were the new insights they acquired from our national work and the power of education and the influence it has on student lives all over the nation.