Add anything here here or just remove it..
By Eagle Rock,
June 4, 2015Leave a commentMeet The Team 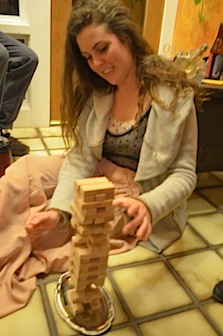 Our featured Eagle Rock educator this time around is Brighid Scanlon, who joined us a couple of years ago and jumped in feet first. Starting out as a Public Allies teaching fellow in world languages, she taught Portuguese and Spanish as well as music and theater.

Brighid also designed a Telenovela Spanish course, directed our Spring 2013 musical RENT, taught a Brazilian singing class, co-directed In the Heights (Spring 2014) and The Vagina Monologues (Summer 2014), worked in the Improv Ensemble, and is helped design an Arabic course and Spring Awakening and this trimester is teaching a Gender and Violence course. Oh yeah, she’s also a Ponderosa House parent, which she unabashedly terms the best house.

Is there more? You bet there is!

Brighid Scanlon: Previous to Eagle Rock, I worked on my master’s degree and taught college Spanish courses at the University of Delaware. In the summers, I headed south, backpacking around Peru and leading international service programs for high school students in Costa Rica through Global Leadership Adventures. I also worked at a multimedia design center where I assisted people with design, video and digital music projects.

Brighid: When I was in high school, I didn’t have a ton of positive relationships with adults. I found my high school classes to be pretty mundane. When I discovered the incredible courses offered at Eagle Rock and witnessed the relationships between students and staff members, I fell in love.

Brighid: I really enjoy being in the outdoors whenever I can. When I’m inside, I like cuddling up with a great novel, cooking vegetarian food, singing, and [attempting] yoga.

Bridget: I don’t know much about reality TV, but I’m sure I would make a really excellent Kardashian or Housewife of New Jersey.

Brighid: That’s a really hard question. Most of all, I look forward to graduation because it’s a time to focus on the growth each student on the stage has made and a celebration of their countless successes.

Brighid: For a long time my dream job was to work for Sesame Street. And you never know, it could still happen!

ER: Where did you receive your college degrees?

Brighid: I graduated from the University of Delaware with a Bachelor of Arts degree in Spanish studies and mass communication, and then received a Masters of Arts degree in foreign language pedagogy with a Spanish focus.