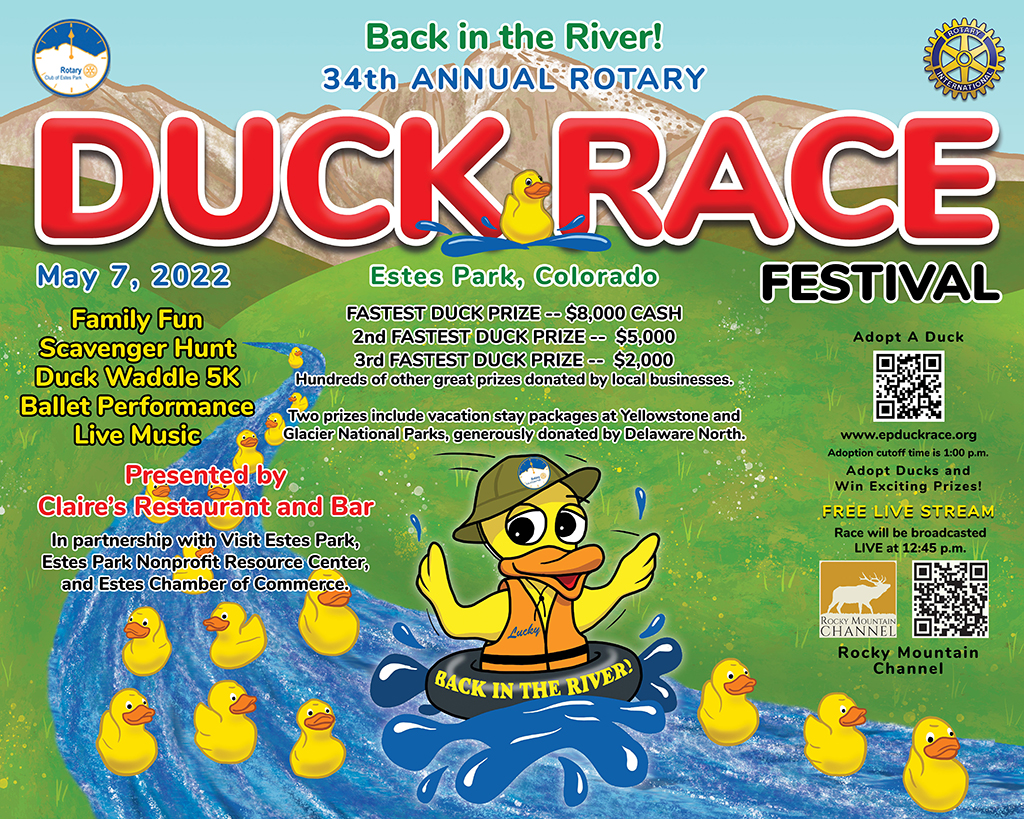 After a couple of years of virtual duck races, this year, the ducks are back in the Big Thompson River. The Estes Park Duck Race — a benefit event that helps to raise funds for, among other things, our Graduate Higher Education Fund will be held on Saturday, May 7.  Now known as the Estes Park Rotary Duck Race Festival, the daylong event maintains its tradition — dating back 30 years — in which participants launch thousands of little yellow duckies downstream in hopes of winning from among hundreds of prizes. This year the grand prize is $8,000 in cash, with the following four winners picking up $5,000 & $2,000 along with destination vacations at national parks. In addition, hundreds of prizes from Estes Park merchants and others will be handed out at the finish line.

However, the real winners of this duck float and fest are the benefiting organizations and charities whose supporters “adopt out” the rubber racing ducks, with 95 percent of each duck’s adoption fee going directly to locally-based organizations, including Eagle Rock. In the past three decades, more than $2.4 million has been raised for worthy organizations and causes. To keep the overhead low, the Rotary Club of Estes Park organizes the Duck Race Festival and handles all the administrative, operational, and financial aspects of the event.

Consistently among those 60 or so local recipients of adoption revenues is our Graduate Higher Education Fund. Eagle Rock’s Graduate Fund supports our student graduates, giving $14,000 toward the costs of higher education. Our graduates are young people who, by all intents and purposes, weren’t destined to graduate from high school, let alone seek a higher education.

Our fundraising goal for this year’s duck race is $10,000 and that’s why we’re asking you to adopt a duck. Or two. Or 10 or more. The cost is $22 for an online adoption. But here’s where the real deal lies: For each duck benefiting Eagle Rock that you adopt, $19 goes directly to our graduate education fund.

The Estes Park Duck Race got its start in 1989 as a way to support the local charities of the Estes Valley. In 1989, the town didn’t have a United Way or any other organized way to collect and distribute funds to needy organizations in town. So, four local townsmen sat down for coffee and a chat and came up with a plan to raise money for charity groups as well as extend the so-called shoulder season for merchants. 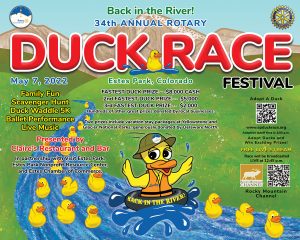 A rubber duckie race along the river running through the main part of town sounded like a natural and the annual event now sees 5,000 to 7,000 ducks adopted by people vying for prizes — and a chance to give back to the community.

Elevated to festival status means the event has much more going for it than just a duck race. There’s the Duck Waddle 5K Race at 9 a.m. The festival itself gets underway at 10 a.m. at the George Hix Memorial Riverside Plaza and Nicky’s Steakhouse. And the duck drop begins at 1 p.m. at Nicky’s on Fall River Road.

The festival continues until 4:30 p.m. at the finish line at the George Hix Memorial Riverside Plaza, where musical entertainment, food and drinks will precede the posting of winners’ names at the Wheel Bar.