For those of us who work and learn at Eagle Rock School, community is at the core of our experience. And our daily “Gathering” has long been the centerpiece of that idea.

Every Monday, Tuesday, Thursday, Friday, and Saturday, we sit in the hearth area of the Lodge to engage in a 20-minute conversation about community. On Wednesdays, Gathering is held in a number of different ways ­– but that’s a topic for another blog post.

We begin each Gathering with 30 seconds of silence; then we move on to a 10-minute presentation, followed by five minutes of announcements and five minutes of live music. Anyone can sign up to speak at gathering and the topics are as varied as the students and staff themselves. 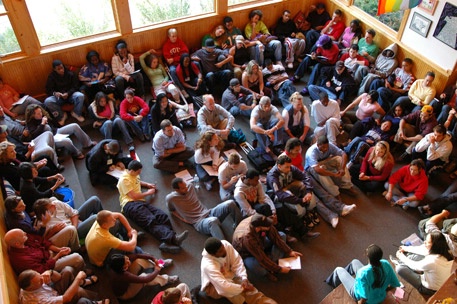 A sampling of recent topics is in order:

We’d like to think a successful Gathering occurs when we walk away thinking differently, inspired by live music, and most important, become reconnected.

Recently I asked Robert Burkhardt, Eagle Rock’s founding head of school, to share some of the history behind our Gatherings. Here’s what he recalls:

“Our very first Gathering was held on March 1, 1993, at what is now Twin Owls Motor Lodge. We wanted a way to start the day together and for everyone to see each other daily. We wanted an oral tradition for announcements that would teach people to listen. I thought of The Gathering as an ongoing conversation about the nature of community. We hoped it would build community.

“Michael Soguero was there at the first Gathering, along with John O, Deb Eads, Judy Gilbert, me, Rick Penner, Norrie Rothenberg, Sally Duncan, Garth Lewis, the AHEd Board (Tom Dean et al.), and a woman who was our first counselor, but left after the first week.

“Tom and I had seen a school meeting at Mt. Bachelor Academy in Oregon, and it was very close to what we wanted for Eagle Rock. So the space in the Lodge was built specifically with The Gathering in mind (we wanted it slightly smaller than the number of people it would have to hold, forcing intimacy). I think of The Hearth as the physical and spiritual center of the school.

“Initially we played taped music with sing-a-longs and handout sheet music, but regularly had live music. As the school grew in size, I reduced the “taped” days slowly and replaced them with live music, which was always the goal. I wanted ERS students to say to others years later, “I had live music every day in my high school – you didn’t?”

“Tara Trimmer-Jewell (ER-5) suggested one day that we stop wasting time with so much applauding the things people said. “My cousin is hearing impaired, and here’s how he claps his hands.” It became an overnight sensation (the hand wiggle).

“Gatherings were very popular, and staff and interns/fellows kept signing up for them, depriving students of opportunities, so I grabbed the Tuesday and Friday Gatherings, where ONLY students would speak. Senior students on in pairs on Tuesdays and newer students in pairs on Fridays.

“When the staff returned in early May 1999 after the Columbine shootings, Christina Paglinauan (Life After Eagle Rock coordinator) suggested we take a moment of silence for those killed. It quickly became the 30 seconds of silence that we practice now.”

So that’s how it got started. And we began to realize that coming together, sitting close, checking in, and listening to the perspectives that co-exist at Eagle Rock, had become a ritual (an important ritual that can pretty much improve a student or staffer’s mindset for the remainder of the day).

Gathering has a positive effect on our campus that has not gone unnoticed. Two weeks ago we had an Association of Colorado Independent Schools accreditation site visit. While commenting on the importance of our “ritual,” one of the reviewers – who got a little emotional – said:

“You all come together a lot. It might feel normal for your community but I can tell you this is not happening in other schools. Eagle Rock students and staff are creating the kind of space where individuals can be vulnerable, access their voices, and really engage in deep relationship building. Your gatherings and community meetings are significant and members of our team were deeply moved by the experience.”

At Eagle Rock, we understand that relationships are fundamentally important to our mission of re-engaging disengaged young people in their own education. We feel strongly that Gathering is time well spent toward that end.

What are some ways you are building community in your school?