Several Eagle Rock School students had the opportunity to work with children in the nearby Estes Park community this past summer where they learned how to successfully run a nature-based summer program.

Our four fledgling camp counselors / para-administrators had a lot to learn. The month-long Eagle Rock School class (the Roots Summer Camp Internship) entailed so much more than just keeping a watchful eye on enthusiastic youngsters. Budgeting, marketing, and child development were just a few of the skills taught to our students as they mentored and managed sometimes as many as 16 children enrolled in Roots Nature Camp, offered by Estes Park-based Roots Community School. 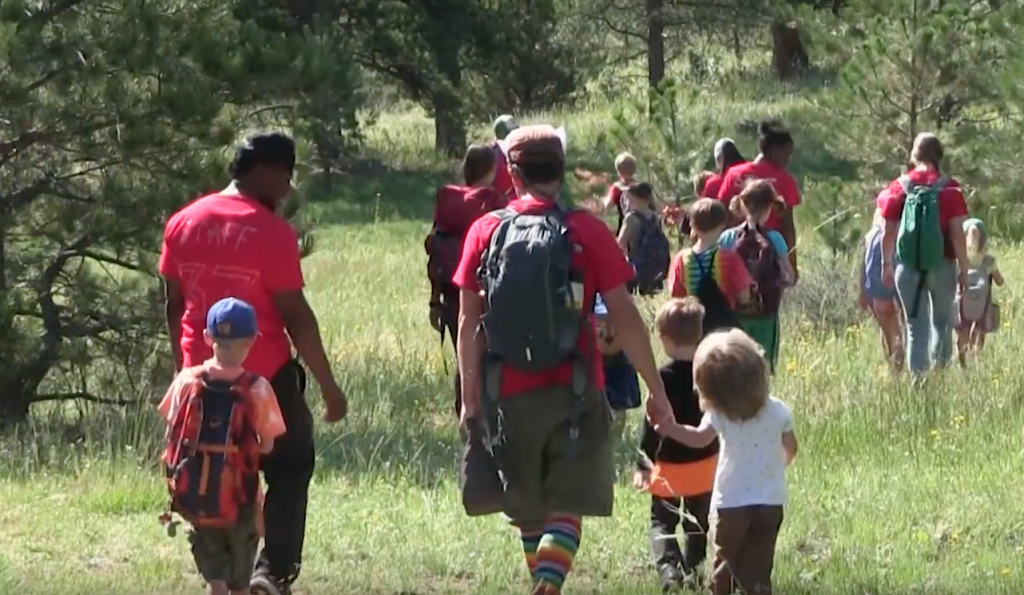 Fact is, Eagle Rock students who applied for the summer class first had to undergo a series of interviews and tests before being accepted into the program. For starters, students had to demonstrate a strong desire to learn about the philosophy of nature-based education, as well as showing an interest in learning about the camp’s organizer — Roots Community School, a local educational organization that partnered with us to present the summer program.

Roots’ offers opportunities for youngsters ages 3-10 in our local area to gain the skills and knowledge necessary to become “innovative, informed, skilled and compassionate 21st century earth citizens.” The school offers community programs, summer programs like the one our students assisted with, outreach, professional development and a one-room schoolhouse for kids in kindergarten through Grade 5.

As you can from the video above, the guiding principle behind Roots’ is to provide hands-on outdoor learning experiences for youngsters living in an ever-changing world. And the first task facing the Eagle Rock-affiliated student counselors was to plan and promote the program to the community. They also had to set up a registration program, and plan many of the outdoor activities with which the youngsters would be engaging in.

Our students’ areas of understanding included learning about:

Armed with working knowledge about the topics listed above, and under the tutelage of Roots’ full-time and seasonal administrators, the Eagle Rock students began teaching their young charges how to solve nature-based challenges, and engaged them in critical thinking that required imagination and some pretty exciting outcomes.

For starters, the camp’s participants were escorted to an imaginary world within the park called Drylandia. They were told that Drylandia was once a beautiful land populated by all the creatures of the earth — including humans. However, the humans became bad neighbors by using up all of the water resources and leaving their trash throughout Drylandia’s pristine forest.

The land became dry and arid, the campers were told, so the humans left for other lands, leaving behind the creatures that were native to the area. The task presented the campers was to prove to the creatures of Drylandia that they could return water to the community and clean up the land.

To keep these promises, the campers performed team-building exercises and eventually found a map to a lost water well — a search that required swinging on a rope to make it over a dragon-infested lava moat that surrounded ‘Drip Drop Island’ where the lost well was located.

Once on the island, the children had to work together to build a water pipe system from objects found in the area that could transport water from the well to the community troughs on the other side of the lava moat.

The program was termed a success after the campers built not one, but two water systems. Youngsters celebrated by hiking proudly around Drylandia, enjoying a story, a lunch, and of course, plenty of water.

Following a month of such activities, the local kids learned that — just as in nature — everything on the planet is connected. And by being armed with the tools, resources, knowledge and skills taught in the summer program, these youngsters have a head start on facing the complex challenges of their generation.

As for Eagle Rock’s students, well, they learned an awful lot about seasonal program management and leading the next generation on mindful expeditions.