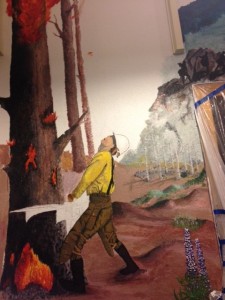 Much like young Forrest Gump and Jenny, Eagle Rock and the firefighters at Rocky Mountain National Park are “like peas and carrots” following the completion of a dramatic mural project on the walls of the Alpine Interagency Hotshot Dorm within the park.

Our campus setting within wilderness that is just minutes away from the boundaries of the national park has been a benefit for students considering a career in forestry management. And the mural project is just another opportunity to strengthen that bond between Eagle Rock and the park’s staff.

Late last spring, these two wilderness neighbors formed a program with the Continental Divide Research Learning Center (CDRLC) and the Alpine Interagency Hotshot Crew (AIHC) that offers some Eagle Rock students the opportunity to explore employment options the park service might have to offer when they graduate.

For their part, a class of artistic Eagle Rock students painted a pair of murals in the Hotshot dorm within the national park. The class was studying the visual communication power that is unique to mural art as they work alongside park employees to commemorate the 100th anniversary of RMNP.

As a part of this park partnership, Eagle Rock students who are enrolled in Cynthia Elkins’ and Dayan Safferstein’s art class spent the better part of five weeks painting a mural outside the kitchen of the Hotshot Dorm. 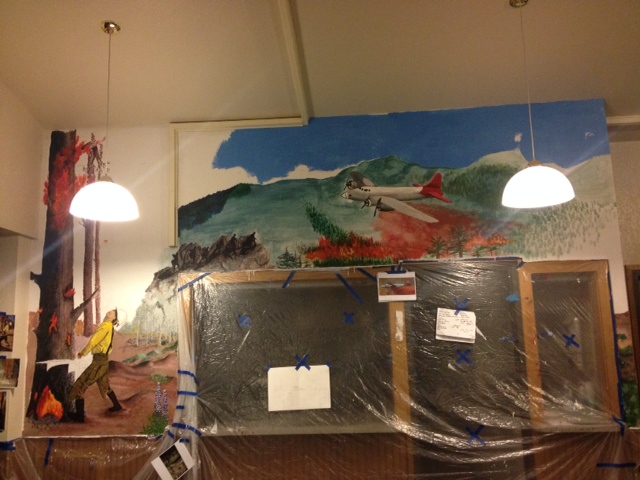 The class was the idea of Paul Cerda, the superintendent of Alpine Hotshots, Ben Baldwin of the Park Service and Jon Anderson, Eagle Rock’s human performance and outdoor education instructor. The finished mural is an expansion of the relationship between Rocky Mountain National Park and Eagle Rock School.

The class centered around art, using the effective communication power standard requirements with weekly reflections on challenges and successes. Students got and gave feedback to each other, and both instructors were active participants in the process.

However, there were hurdles to jump — or in this case, ladders to climb. The safety issues faced by our students in order to work in the park were rigorous. For instance, park regulations covering people under 18 years of age climbing up and down ladders took nearly a week to figure out. That issues and other necessary red tape prompted a delay in the start of the mural project.

Balancing all of the classroom work with the need to finish with a high-quality mural was a challenge throughout the five-week process. Just driving back and forth for lunch KP proved to be a huge issue, partly resolved when the students were able to stay all day at the mural site once a week without returning to campus. 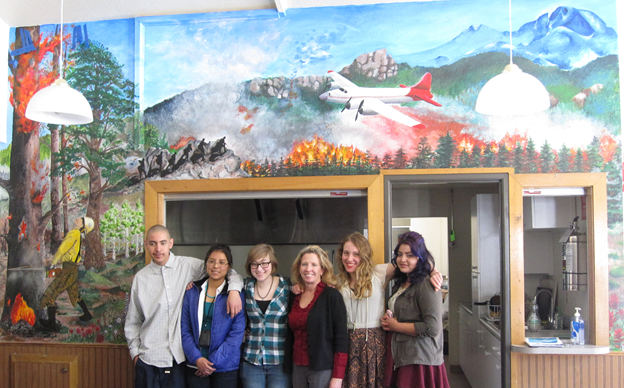 In order to create the Hotshot mural, our students interviewed Cerda to discover his vision for the dorm artwork. The Eagle Rock art instructors believe the project was an overwhelming success that only strengthens the relationship between the parks people and the ERS community. Like peas and carrots.