Visit the Rocky Mountain National Park (RMNP) website and you’ll learn that the vitality of the forests in the Park depends on fire. According to the National Park Service (NPS), fire removes the thick layer of decaying vegetation on the forest floor, while at the same time creates a mosaic of different types and ages of forest vegetation that improves habitat and increases the diversity and abundance of wildlife.

And when it comes to developing skills as a wildland firefighter, Eagle Rock’s campus setting within wilderness — just minutes away from the boundaries of RMNP — is a definite plus for students interested in learning more about a career in forestry management. 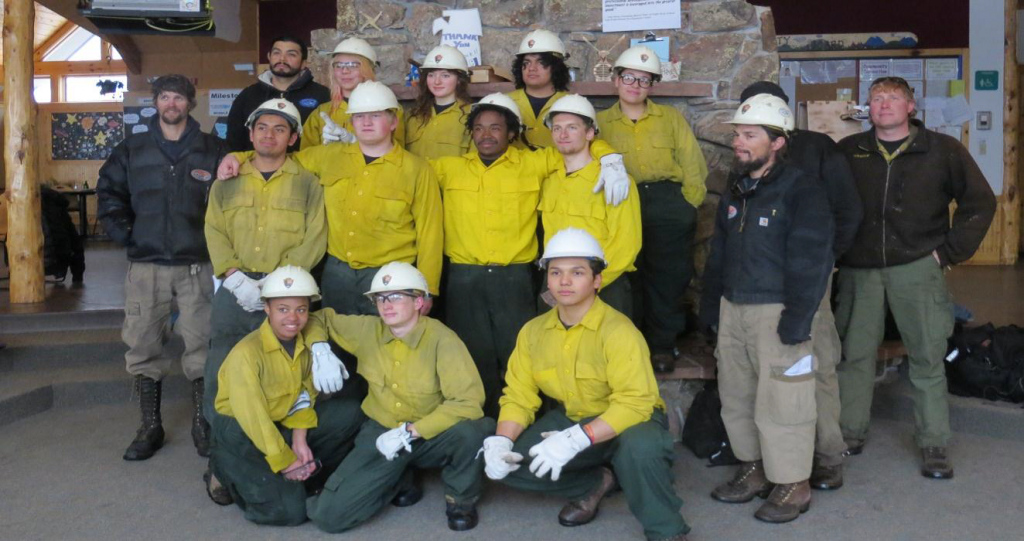 That’s why we joined forces and created a program with the Continental Divide Research Learning Center (CDRLC) and the Alpine Interagency Hotshot Crew  (AIHC) — so our students can gain an intimate knowledge of a neighboring world-renown national park as well as those who work within the National Park Service to combat and manage forest fires. As a result, select Eagle Rock students not only have the opportunity to call RMNP their classroom, they’re also be able to learn from and quiz national park employees, exploring the options the park service might have to offer post-Eagle Rock.

Logistically speaking, students enrolled in the class spend the first five weeks of the trimester building their firefighting-related resume by participating in the same safety training that all RMNP employees and volunteers receive. During the second five weeks, they work closely with members of the esteemed Alpine Interagency Hotshot Crew — which partnered with the CDRLC and us — to train young adults such ours.

Training covers the history of fire prevention in the United States, fire tragedies, fire management, and an examination of weather and its impact on fires. Students also participate in a structured — and demanding — physical training program.

Launched for us in 2011 as a pilot program, our initial cohort of students were put through their paces via a 40-hour basic wildland curriculum, which ultimately resulted in obtaining certification as wildland firefighters. However, once it quickly became apparent that our non-traditional students would gain more from a hands-on, field-based learning environment supplemented by lecture, the program expanded.

Now, the program is built upon a curriculum developed by Eagle Rock School instructors and the relationship established previously between Eagle Rock, RMNP and the hotshot crew. The curriculum focuses on history, tactics and objectives, organizational control, and firefighting fundamentals while emphasizing forest health and ecology, leadership, physical fitness, AIHC tradition, and the National Park Service mission and values.

So the next time a forest fire breaks out in Rocky Mountain National Park, don’t be surprised if one of the people helping to mitigate the damage is a friendly Eagle Rock student.