Last trimester, a group of seven students participated in Borders Fronteras — an Eagle Rock School class that afforded students the opportunity to explore their own identities through the lens of the U.S.-Mexico border and the very personal human stories from the line between us.

The students prepared for this work through the timeless Mayan precept of In Lak’ech, which is affiliated with the Mayan definition of the human being — known as huinik’lil or vibrant being, which claims we are all part of the same universal vibration. This was the origin of the recitation, excerpted from Luis Valdez’ epic poem, Pensamiento Serpentino (see below): 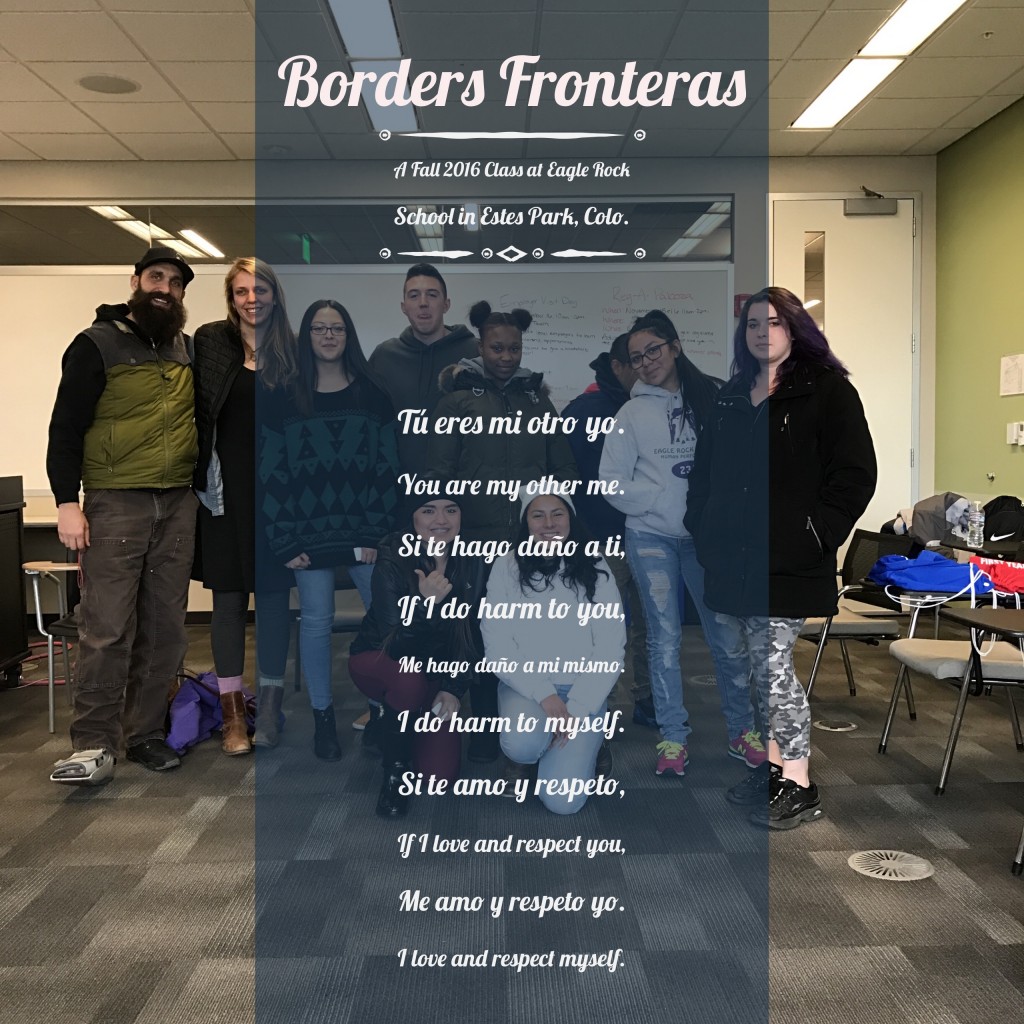 Students discovered that In Lak’ech was a major component of the Tucson Mexican-American Studies programs serving six Arizona high schools from in 1998 to 2010 — an ethnic studies offering that was subsequently banned from all of Tucson’s kindergarten through 12th grade schools under the passage Arizona HB2281. (Note: In 2010, Arizona’s state legislature passed HB 2281, which was then signed into law by the state’s Governor. This bill forbade any school district in Arizona to include in “its program of instruction any courses or classes . . . that promote resentment toward a race or class of people[,] . . . are designed primarily for pupils of a particular ethnic group[,] . . . [or] advocate ethnic solidarity instead of the treatment of pupils as individuals.”)

In Lak’ech simply emphasized the fundamentals of people’s narratives and the inclusion of all ethnicities and cultures as a means of representing the entire tapestry of the United States.

Throughout last trimester’s class, our students investigated factors that drive people from their home countries and draw them to the American dream. With a focus on individual stories, students picked up and perfected their interviewing skills and began to converse with Eagle Rock’s Spanish-speaking staff and students in Spanish.

Continuing to hone these skills, the class ventured out into the community where they participated in a local Dia de los Muertos celebration and witnessed the gentrification of Commerce City and Denver with a Colorado native and son of Mexican immigrant grandparents. In addition, they interviewed four students at Metropolitan State University of Denver whose entry into the United States is covered under the Deferred Action for Childhood Arrivals (DACA) program, which allows certain undocumented immigrants to the U.S. who entered the country as minors to receive a renewable two-year period of deferred action from deportation and eligibility for work permits.

By exploring the identities and narratives of others, students discovered mirrors through which their own identities were reflected. Their culminating class project involved selecting someone’s narrative they found particularly interesting and creating an audio-story podcast about that person. As a result, the students produced an array of stories, representing the multitude of identities that weave the cultural landscape of the United States. From a mother’s story of crossing the border, to confronting discrimination, from memories of volunteering on the border in Juarez, to commentary by college students living under the DACA program here in the United States, our Eagle Rock interviewers created a mosaic of identity and storytelling that can be enjoyed below:

About the Author: Josán Perales is the World Languages Instructional Specialist at Eagle Rock School and Professional Development Center in Estes Park, Colo. Born in Zaragoza, Spain, Josán began his teaching career after receiving a Bachelor of Arts degree in Spanish from Willamette University in Salem, Ore. Prior to Eagle Rock, he co-founded the Taos Youth Travel Club, and taught Multicultural Leadership, Art & Media Leadership, and the job-shadow/mentorship program at his previous school.