Joining us remotely at Eagle Rock School & Professional Development Center this trimester is a new cohort of Public Allies fellows, each with eyes set on their own personal growth and professional development while learning about and directly supporting alternative approaches to engaging students in their own education.

This cohort is the 18th since Public Allies first came to Eagle Rock in 2002 and will be the first to ever start their fellowship from their homes instead of our campus in Estes Park, Colo. That’s because of the health pandemic and because on campus learning remains paused and remote for the time being.

Each of these five new and two returning Public Allies Fellows are either beginning or continuing a year-long commitment of service within our residential and community-based experiential education program between now and next August. 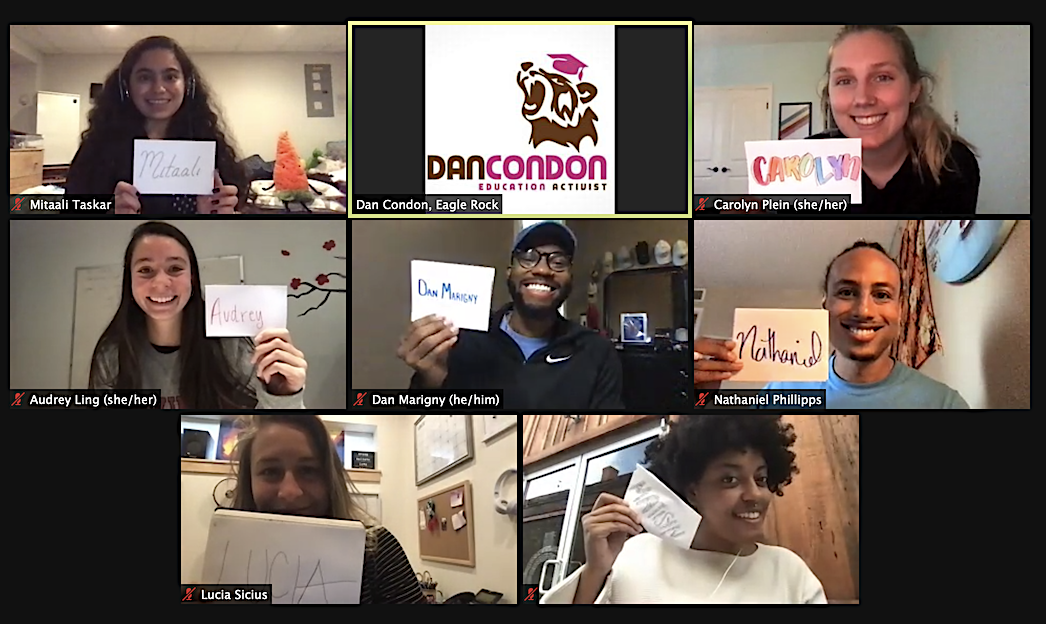 Funded largely by AmeriCorps, Public Allies is centered around the notion that everyone has the ability to lead, and anyone can be an inspiration to others. Each of our new and returning fellows has already demonstrated a passion for progressive education and social justice, and each has participated in our Fellow Core Training program held Aug. 28 to Sept. 11.

The focus of that training was to support the fellows in preparing to serve students at Eagle Rock by building relationships with the community and getting to know the Eagle Rock way, even as that way forward evolves during the health pandemic. They will now become integrated into the staff team and co-teach or co-counsel with our full-time staff online.

But more about that later. Below, we present a brief overview and some interesting facts about each of these young leaders:

Audrey was born and raised in Rockville, Md. As a toddler, cooking shows were her favorite thing to watch on TV. Growing up, she loved participating in arts and crafts activities with her mom, running around outside, and playing soccer.

Audrey graduated from Dickinson College in Carlisle, Penn., where she had the opportunity to live and study in Argentina and Spain. The intersection of her interests and values in human rights, medicine, and education led her to pursue public health work with the Tandana Foundation in Otavalo, Ecuador, after college. Audrey loves to listen to music, eat delicious food, learn from the people around her, ride bikes, and try new things.

Originally from New Jersey, Mitaali moved to Montréal to attend McGill University. There, she earned a Bachelor of Science degree in Biology. Her high school and university careers have been focused on science outreach and education in various forms. In high school, Mitaali worked on community engagement through the local robotics team.

At the university, Mitaali focused on science outreach through clubs and initiatives on campus. In her time volunteering with Let’s Talk Science McGill, she reached out to youth of all ages through classroom science demonstrations, museum activities, symposiums, and festival booths.

Along with her time volunteering, Mitaali attended many workshops for cultivating science communication skills in different media and participated in a research project aimed at understanding youth-led inquiry on topics in science.

Nathaniel graduated from the fifth-largest school district in the nation — at a time when only one out of every two Black male students were doing so. That inequity compelled him to teach and learn as an avenue for social transformation.

Nathaniel has organized, mentored, and supervised students of various ages and advocated within institutional spaces for equity and justice. His most memorable experience was as a project assistant for an experimental international human rights education program across four continents.

He is an alumnus of Julien J. Studley Graduate Program in International Affairs at The New School in New York City’s West Village, and also attended and graduated from the University of Nevada, Las Vegas, and Las Vegas Academy of The Arts. Nathaniel also holds the distinction of being a founding member of Black Youth Project (BYP100) — a national, membership-based organization of Black 18-35-year-old activists and organizers, dedicated to creating justice and freedom for all Black people.

Matisyn hails most recently from Greenville, S.C. After completing her BA in Music and Philosophy at Furman University (also in Greenville), Matisyn chose to pursue a life in music education,  starting with her fellowship here at Eagle Rock.

Her passion for music began in her hometown of Las Vegas, Nev., and followed her into the South in 2011. After graduating from the South Carolina Governor’s School for the Arts and Humanities, Matisyn continued her musical journey at Furman, studying viola with Dr. Anna Joiner — a highly respected artist and educator who has performed with orchestras in Florida, Georgia, North Carolina, and South Carolina and participated in the Aspen, Brevard, and Sarasota summer music festivals. Matisyn has attended Green Mountain Summer Chamber Music Festival in Vermont where she was guided by Dr. Daniel Sweaney, winner of the Fischoff National Chamber Music Competition.

By 2018, Matisyn was selected to participate in the Furman Music Study-Away program at the Academia Dell’Arte in Arezzo, Italy, where she spent the 2019 fall semester studying with world-renowned violaist Carmelo Giallombardo. Matisyn has worked closely with the non-profit, Pridelink, as an advocate for the LGBT+ community in South Carolina. She also served as president of the Furman Univ. Pride Alliance while working closely with Furman’s Center for Inclusive Communities as a Dins Dialogue Workshop Series facilitator (Dins’ seeks to gauge the experiences of underrepresented students at Furman).

Finally, Matisyn spent the summer of 2019 as a programs intern with the organization Supporting and Mentoring Youth Advocates and Leaders on Capitol Hill in Washington, D.C.

Carolyn was born and raised in the San Francisco Bay Area and moved to Texas when she was in high school. She is a recent graduate of The University of Texas at Austin, where she received her bachelor’s degree in Social Work with a minor in Philosophy.

Carolyn first discovered a passion for working with youth during her time in the teen leadership program at YMCA Camp Loma Mar — the East Bay’s oldest and best-known overnight camp. During her time at UT Austin, Carolyn enjoyed participating in intramural basketball and student legislative organizations and worked with youth in various settings, including teaching computer coding to elementary-aged children and working at the YMCA of Austin. As a part of her degree, Carolyn interned at American YouthWorks, an Austin-based non-profit that offers educational and vocational pathways to youth. There,  she provided case management services and participated in school programming.

In her free time, Carolyn loves discovering new music, being active (preferably playing sports with other people) and trying out new recipes or DIY projects.

Lucia is originally from Miami, Fla., and has lived in Spain and Chile as well. She graduated from Florida State University (FSU) in Tallahassee, where she received her bachelor’s degree in biological sciences. While at FSU, Lucia worked as a resident assistant in the residence halls as well as a night staff member on campus.

Lucia’s passion for education and social justice came from her work with PeaceJam Southeast. Lucia also has a passion for music (playing and listening), sports (especially soccer), traveling, having adventures, and hanging out with friends.

Dan was born and raised in western Kentucky but spent most of his early childhood traveling the country playing sports. He has nearly completed his college career — Dan plans to earn a degree in Psychology with concentrations in Anthropology, and Global Public Health — all part of an individualized major program he created at the University of Louisville (Ky.).

Throughout the years, Dan has mentored, tutored, and coached youth of K-12 ages, worked with athletic trainers at the collegiate level, and has been heavily involved in whatever community he has had the opportunity to be placed. Dan is excited to continue to share his passion for athletics, health/fitness, and working with youth.

Before officially joining us at Eagle Rock, our fellows performed orientation and training work remotely. The focus of the training was this: How can I prepare to serve students at Eagle Rock by building relationships and by developing my identity, skills, knowledge and critical lens?

Highlights of the first four-days of core training included:

Finally, we have one classroom instructional position to fill. Specifically, we are seeking a Public Ally that is interested in pursuing alternative teaching licensure, although the position is available in any content area. If you’re interested in discovering more about the opening, or would like to apply for the position, please visit our Public Allies Fellowship page or reach out directly to Christi Kelston, Director of Public Allies, Eagle Rock by email using ckelston[at]eaglerockschool[dot]org.