Add anything here here or just remove it..
By Eagle Rock,
December 13, 20181 CommentMeet The Team

If you work at Eagle Rock, there’s always a lot to celebrate and be thankful for, especially at this time of the year. In addition to celebrating Thanksgiving on our mountainside campus in Estes Park, Colo., many of our students, staff, faculty and administrators are making plans for the upcoming Winter Trimester Break (Dec. 18, 2018 – Jan. 6, 2019).

But before parting ways until the New Year, there’s one more major year-end celebration on the calendar. This Friday, Dec. 14, the Eagle Rock community will gather or go online to celebrate the high school graduation of three more Eagle Rock School students. 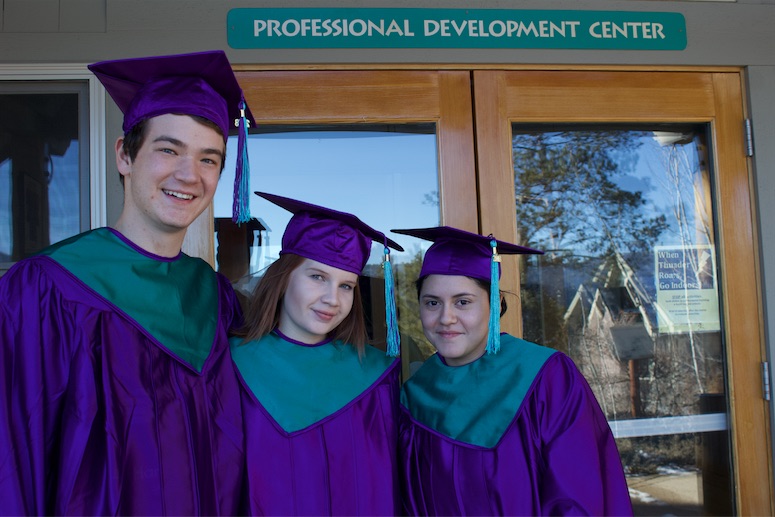 In particular, it’s Spencer Lanier, Hailee Williams, and Itxel Nava-Barron’s turn to take to the stage at our Human Performance Center — beginning at 4 p.m. (Mountain Time) — to accept their high school diplomas. For the folks at home, you can follow along online via the livestream that’ll be made available exclusively through the Eagle Rock School and Professional Development Center page on Facebook.

As you’ll learn by reading the entries below, one of our new graduates says his immediately plans call for enrolling in a community college and completing his college prerequisites before taking classes at a four-year college or university in starting in 2020. Our other two grads say they’re going to grab their scissors and combs and take on cosmetology classes in order to learn hairstyling, with one expressing interest in buying an RV and crisscrossing the country, offering inexpensive haircuts to low-income people she meets along the way.

For more information on each of our December 2018 grads, including their favorite memories of Eagle Rock, their short and long-term goals, and their own sage advice for current and incoming Eagle Rock School students, check out the write-ups below:

Spencer Lanier (arrived at Eagle Rock in May of 2016) comes from Austin, Texas, and a family of four. He is a strong force in Juniper House and has been involved in a number of leadership opportunities on campus.

Spencer has served as a Student Ambassador for Eagle Rock School and Professional Development Center for seven trimesters. In this role, he has helped build the Student Ambassador Program (SAP) that enables students to practice their leadership and networking skills. The program also provides educators who visit our on-campus Professional Development Center an orientation to Eagle Rock School through the voice of the student.

Spencer has represented Eagle Rock by conducting campus tours for visitors, participating on panels, and traveling with our Professional Development Center (PDC) staff to Washington, D.C., and Burlington, Vt., for PDC engagements. He has also participated in a Rocky Mountain National Park internship and has served in the student Mentor Program for five trimesters. There, he assisted in new student orientation, facilitated mentor/mentee activities, and planned out logistics for the Mentor Program with an Eagle Rock staff member. Additionally, Spencer has been involved in Mag 7 — a campus group featuring seven veteran students that focuses on various leadership roles and opportunities. He also took on a leadership role to give voice to students and support staff members in nightly duty activities.

His favorite memory of Eagle Rock was his run-in day from the 24-day Wilderness Experience in the spring of 2016. To this day, he feels pride in having completed that rugged challenge. Running back onto campus opened a new chapter of his life and the excitement and possibilities of that day have kept him going.

After graduation, Spencer plans to take a gap semester where he will enroll in community college classes and complete college prerequisites before he goes to a four-year college or university in 2020 to study Bio/Pre-Medicine. He is also thinking about traveling the world and getting a job that aids with disaster relief or with a service-based community organization.

Spencer’s advice to current Eagle Rockers is this: “We don’t have a school without students. Use your voice, advocate for yourself, and make your Eagle Rock dreams a reality.”

Hailee Williams (arrived at Eagle Rock in January 2017) is from the small town of Cushing, Okla., where she was raised by her father and has a little brother to whom she is close.

At Eagle Rock, this Ponderosa House resident says her most memorable involvements include participating in the musical Allegiance, performing at the Brave New Voices International Youth Poetry Slam Festival in San Francisco, and traveling to New Mexico for a class called ReCrearte. In Allegiance, Hailee played the part of Nan, a Japanese American woman who was placed in an internment camp during World War II. Hailee describes learning more about her culture as well as recognizing and accepting her humanity through the role she played.

In her Poetic Justice course, she learned about different literary devices and used those to write poetry about her life. This class cumulated with the Brave New Voices Poetry Festival, where Hailee shared a piece of poetry about a close relative’s addiction. Hailee mentions that this experience helped her heal and allowed her to support others. In her ReCrearte course about upcycling trash into art pieces, she created a mini-mural with half a sun and half a moon representing her mental health. This piece signified how to balance light and darkness in her life.

Hailee’s favorite memory of Eagle Rock is when she participated in a music gathering, with students and staff present, and sang Christina Aguilera’s “Beautiful” while taking off her makeup. She described this memory as being able to finally show everyone in the community that it is beautiful to have flaws.

Hailee’s advice to current Eagle Rockers is that, “in order for us to flourish, we must nourish. People should understand that we are all growing at different points of our lives and we need to support each other.”

Itxel Nava-Barron (arrived at Eagle Rock in January 2016) was born in Mexico and raised in Panorama City, Calif. She has five sisters and was raised by her father. On campus, she was a member of Lodgepole House.

During her Eagle Rock career, Itxel worked as a student instructor for two different courses: Fiberlicious and the Explore Week Montgomery Pass Skiing Yurt Trip. Her passion in art and her experience in participating in art classes prompted her to become involved in co-teaching the Fiberlicious class this past trimester. In this class, she supported students in learning fiber art techniques such as weaving, felting, batik work, silk painting, sewing and up-cycling clothing. She has also been a two-time student instructor for the Yurt Trip, where students went telemark skiing for a week, lived in yurts, and concentrated on teamwork in a winter environment.

Itxel’s favorite memory of Eagle Rock is the National Outdoor Leadership School (NOLS) trip and Green River trip in which she was a participant. She applied for and was awarded a NOLS scholarship, which translated into a horseback riding independent study in Wyoming. Itxel said that the opportunity to be around horses for 20 days was amazing because the horses were so loving and nice.

Her plans after graduating from Eagle Rock include cosmetology school to learn about hairstyling. Her long-term goals include starting her own hair business in an RV and traveling all over the country — especially national parks in California. If everything goes according to this plan, Itxel’s RV hair business will cater to low-income youth who may not have the money to afford haircuts.

Itxel’s advice to incoming Eagle Rock students is to, “Take advantage of what is here. There are so many opportunities here that you would not be able to do unless you had a lot of money. Take advantage of the classes that you want to take, because they aren’t the classes you will find anywhere else. They are hands-on, and you will remember them forever.”