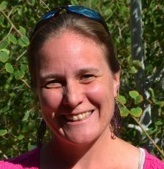 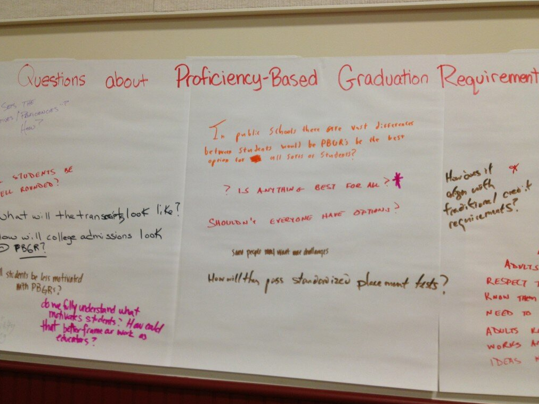 When I moved on to a new job helping to develop proficiency-based learning in Vermont’s most diverse and urban districts (Burlington and Winooski), I drew upon what I learned working with Eagle Rock. I also brought Eagle Rock into the work I was now doing with the Partnership for Change.

Eagle Rock facilitated a Community Learning Conversation that brought together more than 350 students, parents, teachers and community members and was featured on the local TV station and picked up by Huffington Post. Eagle Rock also facilitated a weeklong work retreat for a diverse group of stakeholders from Burlington and Winooski, and it had tremendous impacts in both schools.

Winooski Middle/High School (WMHS) made tremendous strides toward proficiency-based learning during the two years that I was fortunate enough to work with it in my role at the Partnership for Change. When I had the opportunity to come to work for the Professional Development Center at Eagle Rock, I asked to be able to continue to serve WMHS as one of our partners. Thankfully, that has been possible.

Every conversation that I have with my main contact, Matthew Webb, in Winooski, and every time I work with Winooski faculty, I am inspired and hopeful. WMHS serves one of the poorest districts in Vermont, and is a refugee resettlement location, meaning that nearly half of their student body has experienced little or interrupted formal schooling in their lives and needs to learn English in addition to the other language(s) they already speak.

Like many of our most under-resourced public schools, serving students most in need, Winooski School District gets bad press because of their test scores. But, if I still lived in Vermont, I would want my own children to attend Winooski schools because they have spirit and grit and are truly committed to doing what’s best for kids, in any creative ways possible.

As a member now of the PDC team here at Eagle Rock, I feel privileged to partner with WMHS on its journey. The school is committed to the goal that all students graduate ready for college, career and civic success. Specifically, it has identified six graduate expectations (GXs) in which all students must demonstrate proficiency in order to graduate:

Drawing from Eagle Rock’s example, Winooski has decided that all students must complete a complex assessment in each of the six GXs (this is equivalent to Eagle Rock’s Power Standards.) Initially, WMHS has identified its senior project as a primary example of the type of learning and demonstration that it wants students to be doing.

With my coaching in assets-based change, the school decided to build upon this success as it determines other complex assessments for the other graduate expectations. This year, it is prototyping a number of complex assessments for Critical Thinking and Problem-Solving, and it is also holding an Expo Week in the spring when students will share their projects in presentations and conversations.

My role includes being a cheerleader — pointing out the tremendous movement Winooski has made in its change process; an advisor drawing from the PDC’s rich model of change to help it become effective in meeting goals; and a facilitator, primarily of leadership team retreats, a key aspect of which is building internal capacity for a sustained culture of innovation and growth.

During this last November’s leadership team retreat, one of the things that I coached the staff on was developing keystone habits. A keystone habit is a single thing that an individual or organization commits to doing, and it has a ripple effect to help them effectively meet multiple goals far more effectively than if they had tried to do many different things to meet those goals.

In brainstorming keystone habits to be sure the faculty is focusing on teaching towards the graduate expectations, Winooski’s leadership team brainstormed a number of standard, high-quality practices to reach their goal. Among them was collaboratively looking at student work, classroom observations and one-on-one coaching conversations with teachers.

And while they saw that these things would work, they did something that I love about Winooski. They said, “Hey, these things are kind of boring. We want to choose something that’s fun and exciting and also works.” So, we did a second round of brainstorming keystone habits, and folks really stretched out of the box.

They finally settled on having a student as “GX Champ” each day. The GX Champ is nominated by a faculty member for success in one of the graduate expectations (GXs).

Students are recognized through public address announcements, the school newsletter, and on Twitter and other school-sponsored social media. And, the GX Champ — who is chosen by a member of the Leadership Team — gets to carry around the championship belt, in the tradition of boxing and MMA champions.

This was such a wonderful Winooski creation — it completely captured the creative, grassroots, student-centered flavor of Winooski. One of the things that makes me most proud of the work we do with Winooski is that we honor who they are. No consultant could come to them with a suggestion like the GX Champ.

A good consultant would suggest collaboratively looking at student work — being a best practice that may have helped if the leadership team was sure to dedicate time and energy to it. But all too often, those solutions that are generated from outsiders simply do not work. When I was a recipient of the PDC’s coaching and facilitation, I felt profoundly honored for the expertise and insight that I had. Now, I extend that to Winooski, and they regularly tell me how refreshing it is to work with an outside “consultant” who values them and their ideas rather than telling them everything they’re doing wrong and how to do it differently. In reflection on this process, WMHS’s Matthew Webb said, “For school change to work, it needs to tap into teachers’ hopes and capabilities and creativity. We are so fortunate to have found Eagel Rock’s PDC and its model for change that believes in and builds upon the best of who we are.”

By the time I returned to WMHS in January of ‘15, the GX Champ had already started to have a ripple effect. Although the first student had not yet been recognized, faculty nominations were rolling in. All of a sudden, faculty was focused on what they wanted students to learn for each of the GXs.

Undoubtedly, they will keep this in mind as they continue planning for the rest of the year. And, GX language is starting to be common parlance in the school. Having a student carrying around a championship belt is a wonderfully fun way to start conversation and keep GXs on the front burner in everyone’s perceptions. Teachers are starting to talk about the tremendous resource that the database of nominations can now provide — which groups of students are being nominated? Which GXs are mentioned the most often? What types of projects are providing the best avenues for learning GXs? And, since the GX Champ has now started, the excitement and fodder for discussion just grows.

Coming down the pipeline, Winooski’s leadership team is working on developing the complex assessment and rubric for Physical, Social, and Emotional Well-Being. They are also facilitating a process with the entire school for translating all of its graduation requirements into proficiency-based requirements and eliminating Carnegie Units completely. Winooski will use this spring’s Expo to see where students are successfully gaining proficiency in the GXs and where they need to improve.

And they will use the GX Champ continually as a way to focus on the graduate expectations, honor students and improve their practice. WMHS is committed to being sure that every single one of its students graduates and is able to succeed in college, career and community. Winooski is well on its way, and the Professional Development Center at Eagle Rock plays a key supporting role in their journey.

About The Author: Sarah Bertucci is the Professional Development Center associate at the Eagle Rock School and Professional Development Center. Sarah has held numerous school leadership positions including program coordinator for Big Picture South Burlington; senior organizing fellow for the Institute for Democratic Education in America; and most recently, personalized, proficiency-based graduation fellow for the Burlington and Winooski Partnership for Change.