Add anything here here or just remove it..
By Eagle Rock,
June 12, 2015Leave a commentPublic Allies

Welcome to what will be the first of many updates about what’s happening in the lives of educators who participated in the yearlong Public Allies fellowship program here at the Eagle Rock School and Professional Development Center in Estes Park, Colorado. What we intend to offer with posts such as these is a glimpse into the lives of those who went on to forge their careers in progressive education post-Eagle Rock.

But first, a short explanation of what the Public Allies program is all about. It’s a national movement based on the notion that everybody leads and everyone can make a difference. That difference can be as small as helping someone believe in themselves, to step up and make change. 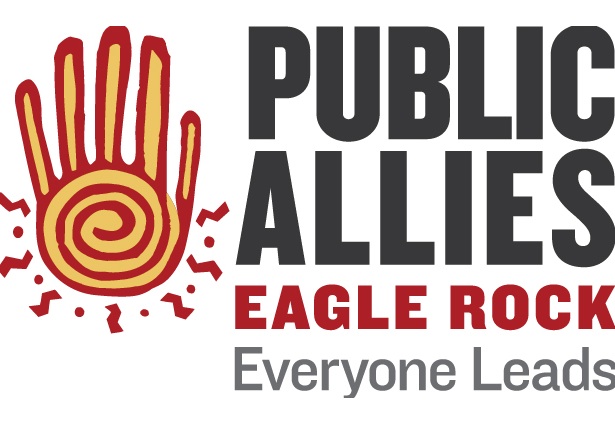 Public Allies has as its mission the advancement of new leadership to strengthen communities, nonprofits and civic participation. The Public Allies signature AmeriCorps Ally Program identifies diverse young adults and prepares them for leadership through paid full-time nonprofit apprenticeships and rigorous leadership training.

And how has that worked out so far? In the past 23 years, more than 6,000 Allies have completed the program with more than 80 percent of them continuing careers in nonprofit and public service. Meanwhile, many of this nation’s nonprofits are struggling to recruit and retain the diverse talent they need to address our most pressing community challenges. The Millennial generation — the largest and most diverse generation in history — is energized to work for change, but doesn’t know how to get started.

That’s where Public Allies comes in. With the edict that “everyone leads,” participants create pathways for young people to engage in their communities, and help communities and organizations tap the energy, passion, and perspectives of a new generation. Public Allies is the leadership and human capital solution our diverse communities need.

That brings us where we are today… happy to tell you about two former Eagle Rock Public Allies Fellows and their current pursuits. First up, Anna McCanse Nelson:

ER: What did you focus on while you were here?

Anna: I was the Public Allies Art Fellow working with Cindy Elkins, Art Instructional Specialist. I worked closely with Lois Easton (Eagle Rok’s former director of professional development) to get my teaching credential while I was there. I partnered with Robert Burkhardt (Eagle Rock’s former head of school) to do an outdoors Art & Poetry class and built a solid foundation of service-learning practices through several of the classes I taught there as well.

ER: Where are you now and what are you working on?

Anna: After Eagle Rock I taught at a new public charter school in San Francisco for a few years. I left that job to join the Peace Corps and served on the island of Dominica for two years where I was an education volunteer. I worked on literacy initiatives at the elementary level, started the first children’s library in the village and piloted a national service learning initiative at the request of the Ministry of Education.

When I returned I went back to teaching for another year but realized I wanted something with more of an international focus. I got my English as a Second Language teaching certification and taught newly arrived refugees while I worked on writing a guidebook about the island I had served on in the Peace Corps. Once that went to publication, I started working for a non-profit called buildOn that has a national and international educational component.  I started on their international team but quickly moved into the role of curriculum specialist for their national service learning programs.

I now run the educational component of buildOn’s programs in seven cities in the U.S. where we engage youth in under-served high schools to identify needs and areas for improvement in their own community and design and implement service projects to meet those needs. Our students also have the opportunity to travel to our international project countries and live with a host family in a remote village in some of the economically poorest countries in the world and work alongside the village members to build a primary school.

ER: What did you focus on while you were here?

Mike: I was the Service-Learning Fellow and helped coordinate the Estes Earth Fest, an Explore Week trip to New Mexico, on-campus greenhouse efforts, and a house pick-up composting program. I taught courses in public speaking, philosophy, photography and social studies.

ER: Where are you now and what are you working on?

Mike: I am currently working as the college and career counselor and history instructor at AIM Academy, a small independent school for students with language-based learning differences located outside of Philadelphia, Pa. I am a contributing writer for The Educator’s Room — an online magazine for teachers written by teachers — and a frequent conference presenter on topics surrounding 21st Century learning. I’m also trying to be a better guitar player, but that’s easier said than done.