Add anything here here or just remove it..
By Eagle Rock,
November 10, 2016Leave a commentAccolades

The Lawrenceville Medal/Aldo Leopold Award is the highest honor granted by this coed independent college prep boarding school for students in grades 9 through 12. Located on 700 acres in the historic Lawrenceville section of Lawrence Township, NJ, the school has more than 800 students from 34 states and 40 countries, and a teacher population of 115 for a 7.2:1 student-teacher ratio. 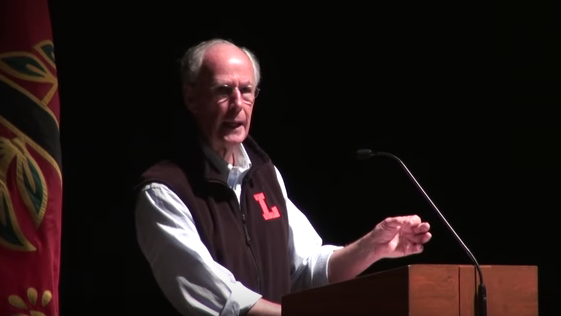 The Lawrenceville Medal has been awarded each year since 1991 and its prestigious recipients have included Nobel Laureates, philanthropists, jurists, physicians, Pulitzer Prize winners, community leaders, a rock and roll star, the CEO of the Walt Disney Company, the president of Honduras, and a Saudi prince.

The award is dedicated to the memory of Aldo Leopold, a distinguished environmentalist and author, and it is bestowed on a former Lawrenceville alumnus who has demonstrated “brilliant, lifelong work in a significant field of endeavor.”

That description fits perfectly with the accomplishments of our own Robert Burkhardt — an educator who has provided thousands of teens with a second chance at their own education.

Robert is himself is a Lawrenceville School alumni (’58) and two of his children attended the school, graduating in 2007 and 2009. His early adult life included time as a Peace Corps volunteer, plumber and circus performer. Burkhardt led early conservation efforts in California and raised funds for grassroots organizations throughout the Pacific Northwest.

But it was his skills as an avant-garde educator that was most evident during his visit to the Lawrenceville campus last month when he took time to deliver a short talk to that school’s students prior to the awards ceremony. During this all-school meeting, Burkhardt related his story in a rap/spoken word style that surprised and delighted both students, their families and fellow Lawrenceville alumni. Check it out for yourself below:

He followed up this unique presentation by answering questions about Eagle Rock School and our Professional Development Center, as well as focusing on how schools can extend Burkhardt’s educational philosophy to other schools.

Later, during the formal awards presentation, Burkhardt credited his time at Lawrenceville for many of the decisions he made at Eagle Rock during his 20-year tenure as our head of school, including the incorporation of a house system for students, an intramural sports program and Harkness-style learning.

He told the group gathered to hear his remarks that classes at Eagle Rock are more “ongoing conversations” than rote learning, and as such, inspire critical thinking and experiential learning. And, instead of standard written examinations, Eagle Rock’s students deliver a “Presentation of Learning” that addresses how they have grown as both a learner and a person.

During his presentation, Burkhardt brought up several personal experiences that touched his life — one taking place at Lawrenceville where he served as a teacher for two years, and the other a remembrance of raising two children within the mountainside environs of Eagle Rock. We present these anecdotes below:

I brought 10 Puerto Rican eighth graders from the South Bronx to the Lavino Field House on a February Saturday. They were completely taken by the sweeping athletic array in that breathtaking building. The following Monday I was accosted by a Lawrenceville master who also worked in admissions.

His words still smolder in the back of my brain. ‘That was a disreputable group of ruffians you brought onto the campus last Saturday — when are they going to break out the marijuana?’

Today I see a ‘more perfect union’ reflected in Lawrenceville’s evolving student body. While the school has not yet achieved nirvana, and there are issues to meet and master, I take solace in these words from Samuel Johnson’s introduction to his 1755 dictionary: “In this work, when it shall be found that much is omitted, let it not be forgotten that much likewise is performed.”

Burkhardt went to say tell the audience of his favorite Eagle Rock memory — his children, Eileen and Patrick, growing up in an interracial mountain setting:

They ate meals, played sports, performed in shows and sang in musical groups with young people from across America. I knew the school was headed in the right direction about a decade in when after a reunion of early graduates Eileen, then in sixth grade, asked me, ’Daddy, can I go to Eagle Rock when I get to high school?’ What better affirmation would a father want?

“No, dear, you can’t. The school is small and faculty kids are not in the student body.”

It was as if she learned hard truths simultaneously about the Tooth Fairy, Santa Claus and the Easter Bunny.

‘Daddy, how long will you be at Eagle Rock? When I asked her why she asked, she smiled and sweetly replied, ‘Because when you leave I want your job.’

Robert — If you’re reading this… congratulations!