Add anything here here or just remove it..
By Eagle Rock,
April 13, 2017Leave a commentMeet The Student

As ER 71 ends, our latest group of Eagle Rock School graduates — seven this time around — will depart our campus one last time amidst a thoughtful display deserving of such an achievement. And it all begins at 4pm MT this Friday, April 14, in our Human Performance Center.

Marking the 71st trimester since Eagle Rock School and Professional Development Center’s founding back in the early 1990s, this latest trimester graduation ceremony will be broadcasted live, online, via our Ustream / IBM Cloud Video channel: http://www.ustream.tv/channel/eagle-rock-school-graduation. 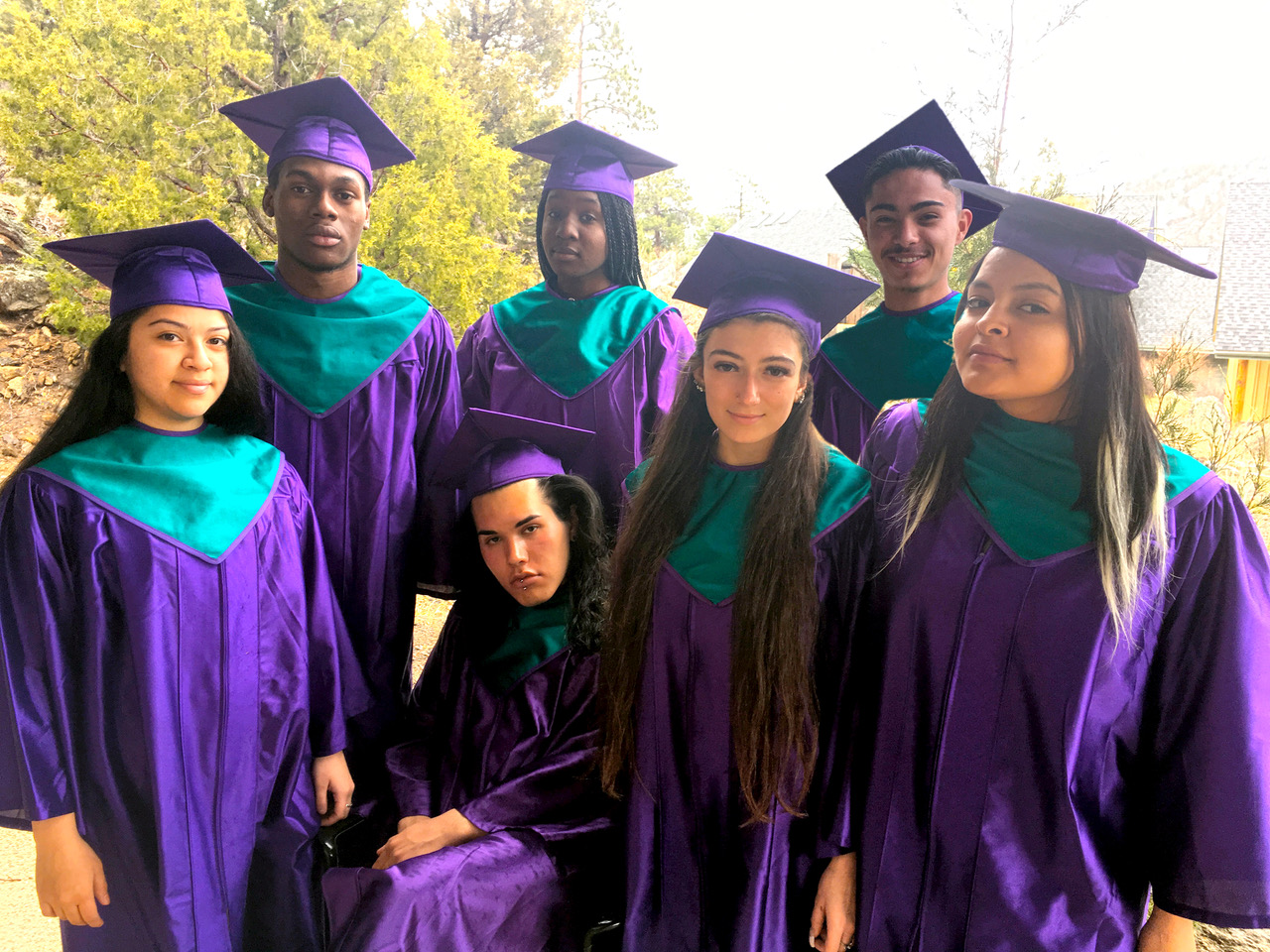 As you may imagine of students who are now fully engaged in their own education, lives, and communities, our seven graduates have big plans in mind for the immediate future. Those objectives, along with their Eagle Rock School-related accomplishments and advice for incoming students, are outlined below.

Albert Molina (arrived at the beginning of ER 61) — Albert arrived at Eagle Rock in September of 2013 from Los Angeles. Most recently a member of Aspen House, he lived in two other houses during his time here. Over the past 10 trimesters, Albert has been involved in Mag 7 (a campus group featuring Eagle Rock’s seven most veteran students that focuses on various leadership roles and opportunities), and was instrumental in starting a debate group where students and staff practice their rhetoric to persuade others to take their view on specific topics.

Albert plans to participate on an upcoming National Outdoor Leadership School (NOLS) wilderness trip, and then earn a real estate license while simultaneously working on a college-level degree in business. His plan calls for shadowing a mentor in the field to gain experience on what it means to be a real estate agent. His long-term objectives include investing in the stock market with the intent of owning his own company with another investor.

One piece of advice Albert offers incoming students is to take time to reflect and really figure out who you are as a person, why you are that person and what type of person you want to become, rather than thinking who you should be.

Barbara Gutierrez (ER 64) — Arriving at Eagle Rock in the fall of 2014, Barbara hails from the San Fernando Mission Hills area of California and is a member of Ponderosa House. She was a Gate Run leader for a trimester, art angel, member of Mag 7, Kitchen Patrol leader, and a student instructor for Juguemos Juntos during her last trimester. In addition, Barbara was part of the team of Eagle Rock School students that designed and painted a mural for the Alpine Interagency Hotshot Crew at their facility within Rocky Mountain National Park. Oh, and finally, she was an intern at the Scratch Deli & Bakery in Eagle Rock’s hometown of Estes Park.

Barbara’s immediate plans are to first secure a summer job a store that focuses on natural made products, and after summer, attend classes at Cerritos Community College (Norwalk, Calif.), as well as become a licensed English as a Second Language teacher.

Her advice to new students? Start working on your grad stuff now because you could make it easier during your last trimester and have more time for fun.

Ella Quinn-Marsh (ER 64) — An upstate New Yorker who arrived on campus in September of 2014 and lived in Lodgepole House, Ella was involved in our school’s musicals, started a reading club, and was usually one of the top readers for our annual book reading challenge. She was also involved in our mentorship program for new Eagle Rock School students, and interned at Riverpointe Spa in downtown Estes Park.

After this Friday’s graduation, Ella says she will seek a summer job that will help pay for college. She plans to go to Rochester Institute of Technology and gain a bachelor’s degree in International Studies to become a French interpreter and travel the world.

Faith Kroma (ER 64) — Our third grad who joined us in the fall of 2014, and a member of the Ponderosa House, is Camden, N.J.’s Faith Kroma. She was part of Mag 7, co-instructed a Wilderness Course, and co-taught our Outdoor Leadership class. Faith is most proud though of her participation in Math Club and starting Power to the People — a social justice group — which she says has been a huge success each trimester it has been offered.

Faith wants to learn more about the stock market and operating a solar farming business of her own. She also wants to live in Liberia because she has roots in that country.

Her advice to incoming students is to come prepared to challenge their own ideas and those of the world. Faith also wants to encourage other students to be willing to learn about others and other things that might not be part of their reality like different ethnicities, races and religions.

Max Gonzalez (ER 63) — Arriving May of 2014, Max lived in Lodgepole House. This Denver, Colo., native started Spectrum, which is a student group that focuses on issues of importance to the GLBTQ community.

Post-graduation, Max wants to work for the cosmetics retailer Sephoria, as well as grow his website that reviews various cosmetics (which we must tell you has an impressive following). He also wants to save money to pay for college where he’d like to receive a degree in Interior Design.

Max wants new Eagle Rock School students to know that while they’re here for school and academics, they need to make the most out of all their time while on campus. “Get as much from it as you can,” he says!

Rahmel Evans (ER 62) — Hailing from Harlem, N.Y., Rahmel arrived in January of 2014 and fit right in at Aspen House. He was captain of the basketball team, a member of Mag 7, and participated in a real estate internship program provided by the school and First Colorado Realty.

Future plans include attending Morehouse College, which is one of the top historically black colleges and universities in the country. Rahmel wants to receive a degree in Business Administration and join the world of real estate upon graduation. At the same time, he wants to use this degree to own multiple investment properties and start an umbrella of businesses.

One piece of advice he’d like to leave with new students: Take advantage of every opportunity; don’t let anything pass you by.

Theara Bolaños (ER 65) — Arriving in January of 2015 from Canoga Park, California, Theara was a proud member of Spruce House. She participated in an internship program offered by Rocky Mountain National Park, took part in a coaching class that taught children from Estes Park community how to play soccer, and was actively involved in the Dangerous Creatures group, which focuses on empowering Eagle Rock School’s female student population.

Theara’s immediate plans are to take on a summer job with Summer Night Lights, which leads activities for youngsters at public parks near her hometown. She would like to attend Los Angeles Mission College and earn a bachelor’s degree in nursing, then become certified as a mid-wife.

Her counsel to incoming students? It’s only going to get ugly before it gets beautiful.

Editor’s Note: If you happen upon this blog post after the 14th of April and would like to watch an archived recording of the above students participating in graduation ceremonies, please visit our Ustream / IBM Cloud Video channel: http://www.ustream.tv/channel/eagle-rock-school-graduation