Add anything here here or just remove it..
By Eagle Rock,
April 10, 20191 CommentMeet The Student

Three times each year, we host graduation ceremonies in order to recognize the personal growth and academic learning garnered by our most senior students, each of whom has completed the requirements set forth here at Eagle Rock School in order to earn and receive their high school diploma.

This trimester’s graduation ceremony — which is known as ER-77’s graduation because it is the 77th trimester since our school’s founding in the mid-1990s — features four such graduates participating in an on-campus celebration that’s scheduled to take place at 4 p.m. (Mountain Time) this Friday. April 12. 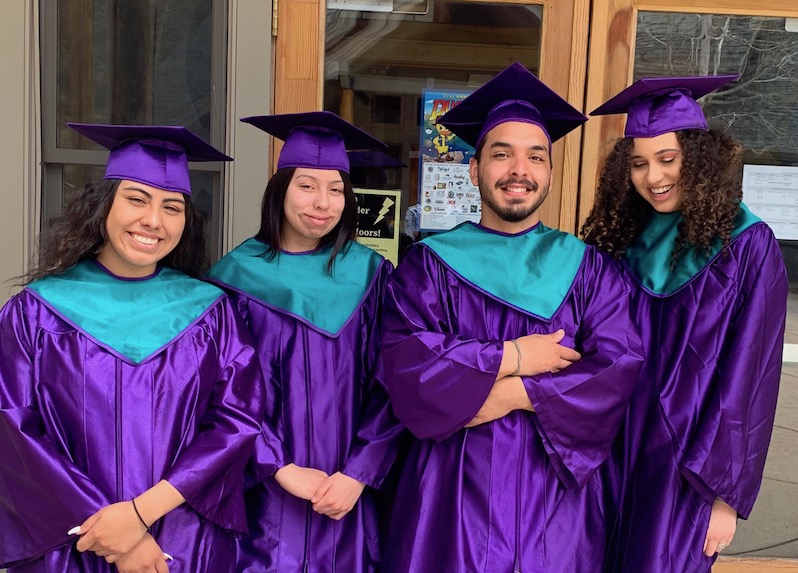 Below is a short biography of each of the graduates (Alethea Auguste, Mohammad Thabata, Yxcelline Serafin, and Maria Suaste Perez) along with their favorite memories of Eagle Rock, their short-term objectives and long-term goals, and advice for current and incoming Eagle Rock School students.

Up first is Alethea Auguste, who arrived at Eagle Rock in September of 2015). Alethea comes from a large family on the Caribbean island of Saint Lucia. She is situated in the middle of seven children — all of whom speak the dialect of the region, Patois. On campus, she has been a part of the residential community in Lodgepole House.

Ask anyone and you’ll quickly learn that Alethea is an outstanding basketball player. She has taken many English and poetry classes during her time here. Other meaningful school experiences in which she has participated include an Explore Week Green River Canoeing Trip and the Colorado Rocks Climbing Trip in southeastern Wyoming. In the Colorado Rocks class, students climbed weekly and studied geology of the Rocky Mountain National Park. Alethea describes those trips as eye-opening experiences and awesome opportunities for her to make friends.

Besides appreciating the company of those around her, Alethea shares a memory of her 18th birthday at Eagle Rock. Traveling to New Mexico with the RecreARTe class, Alethea was continuing her learning about upcycling plastic, metal, and Styrofoam into art pieces. On this day, the Eagle Rock students had just received feedback about needing to conserve water when they found their clothes cut up in the dryer. They had their suspicions about what had happened, and this unfortunate event caused them to further bond. Alethea laughs at this memory and finishes her story by saying that she enjoys every day at the school.

As a post-grad, in addition to getting more sleep, she plans to start an auditing job for the trucking company for whom her mother works.

Alethea’s advice to all Eagle Rock students — those already on campus and those yet to enroll — is this: “It’s not about how long you’re here, it’s about being here for the personal growth.”

Mohammad “Moe” Thabata (arrived at Eagle Rock in May of 2016) hails from Detroit, Mich. He has grown up with addresses in many other areas, including Pennsylvania, Arizona, and most recently, California. Moe has three older siblings, an uncle with six kids, and was raised by a single mother. He recalls constant changes happening in his family and recaps his childhood as 10 kids hanging out together in the forest. At Eagle Rock, Moe started his journey in Spruce House but graduates this week as a member of Ponderosa House.

During his time here, Moe dabbled in various art medium forms, including painting, sculpture, and drawing. He even made drums out of gourds and deer parts. Moe’s artistic talent also emerged in the music studio where he learned to play guitar and piano. He has been a Guardian of Sound for almost two years — a position responsible for the management and care of our on-campus Music Schoolhouse. Additionally, Moe spearheaded the creation of an on-campus hiking group for morning exercise. Another one of his interests is playing video games and spending time with those who play video games.

His favorite memory of Eagle Rock is the Green River Canoeing Trip to Moab, Utah. Moe describes the canyon in the desert with its rich reddish-tan rocks contrasting with the vibrant green vegetation by the river. Not only was he in awe of the beauty surrounding him, but he also enjoyed hanging out on the river and having fish nibble at his feet. During this particular trip, he became good friends with another student — Amr — and they are now best friends.

After graduation, Moe will join a healthcare-focused nonprofit named H2H2 that spreads awareness for healthcare and provides free healthcare to marginalized communities. He will be promoting the organization as well as working at homeless shelters and clinics. Long-term, he hopes to pursue a PhD in a science field. Moe said he is interested in marine biology but would like to do some more exploration before settling on a specific academic path.

Moe’s advice to incoming students is “Find comfort in yourself, take your own advice, and follow your own dreams. Otherwise you become a part of someone else’s.”

Yxcelline Serafin (arrived at Eagle Rock in January of 2017) comes from California’s San Fernando Valley. She grew up in an area where police sirens and ambulances put her to sleep and finishing high school or attending college were not in card for most in her neighborhood. Not the best place, but it is what Yxcelline calls home.

A proud member of Pinon House, Yxcelline has been involved in various leadership roles on campus. In addition to presenting a speech at an event held here on our campus in June of 2018 celebrating our 25th Anniversary, she served as a Lead Ambassador and traveled with members of our Professional Development team as part of our Student Ambassador Program. Yxcelline was  also part of Mag 7 — a student group where seven of Eagle Rock’s veteran students have the responsibility of supporting evening and weekend activities. Another one of Yxcelline’s contributions on campus was being a mentor in the student Mentor Program. In this role, she supported new students with their transition into the Eagle Rock community. As a member of the basketball team, she played her heart out on the basketball court.

Her favorite memories of Eagle Rock were the times where everyone was involved and engaged in celebratory parties, including our 25th Anniversary. She recalls feeling a true sense of harmony on that day because everyone that had or has a connection to Eagle Rock was present.

Yxcelline’s short-term objective is to head home after graduation and work until classes start at the University of Colorado Denver this fall. She also plans to explore and travel during this upcoming summer. Her long-term plans after college include pursuing her aspirations, which she admits are in the development stages.

Her advice to Eagle Rockers and incoming students? “Eagle Rock is a hard place to be with its many ups and downs. When you are here, be the best version of yourself and create your reality for yourself. People are not \necessarily here to be your friend, but you need to make your support system and make the best out of your career here. Lastly, don’t get comfortable.”

Maria Suaste Perez (arrived at Eagle Rock in January of 2017) is from Pasadena, Calif. Her family includes her sister, her mom, and two nieces. Before Eagle Rock, she was involved in drugs and into skipping school. At Eagle Rock, she became a member of Lodgepole House.

Maria’s favorite memory of Eagle Rock happened on her Wilderness Orientation course. She recalls sitting by a little creek and becoming good friends with fellow students Hendrick and Ryan, her patrol brothers. They would talk and complete Kitchen Patrol together.

After graduation, Maria plans on taking a kayaking and backpacking course offered by the National Outdoor Leadership School (NOLS). Her long-term goal is to be happy and be with her family.