Most everyone associated with Eagle Rock — and in particular those who work within our School and Professional Development Center (PDC) — have always been big fans of TED talks. Run by a nonprofit organization devoted to what it calls “Ideas Worth Spreading,” TED talks have been delivered at conferences around the globe since 1990. 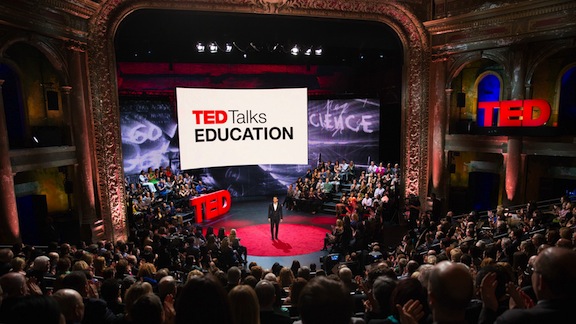 In fact, PDC staffers and students recently shared a TED connection at TEDxABQ2015 in Albuquerque, N.M. — an event that focused specifically on education (see: Eagle Rock PDC Lends an Experienced Hand at TEDxABQ Education). And while merely attending a TED event may appear on the surface to be a passive act, the listening aspect is huge to our PDC’s theory of action.

That theory begins with the edict that we don’t just drop in on an educational institution and impose our process on that entity. Instead, we begin by listening — embedding ourselves in the context, conducting interviews and most important, observing and hearing from students and educators local alike. We get a better understanding of what’s going on by listening to what local school leaders value and observing those values in the school setting.

Our recent attendance at TEDxABQEducation reflects this first step. We had already been engaged to help Albuquerque schools better document and scale their approach to personalized learning (see: New Metrics Initiative Taking Shape in New Mexico). So we sent our Director of Professional Development, Michael Soguero, along with a PDC Fellow Kelsey Baun and four Eagle Rock students to Albuquerque where they embedded themselves in four local schools to conduct focus group interviews.

As a result, we are currently developing processes that support local wisdom to solve local problems. We take advantage of the best local thinking rather than impose a generic framework that may be completely foreign to the local school district.

So whenever the topic of TED talks surfaces, we’re all in. If you’ve never experienced what TED offers educators, click on one of the videos below — just for a taste. We’re thinking you’ll probably end up watching each of them.

When 13 year-old Logan LaPlante grows up, he wants to be happy and healthy. This talented teen discusses how hacking his own education is helping him achieve this goal. From Feb. 2013:

Sir Ken Robinson makes an entertaining and profoundly moving case for creating an education system that nurtures — rather than undermines — the creative process. From Feb. 2006:

Rita Pierson, who has been teaching for four decades, said she once heard a colleague say, “They don’t pay me to like the kids.” Her response: “Kids don’t learn from people they don’t like.’” This video is a rousing call to educators to believe in their students and actually connect with them on a real, human, personal level. From May 2013:

Noted philosopher, author, educator and activist Cornel West once called young poet Malcolm London the “Gil Scott-Heron of this generation.” His feisty, passionate performances take on the issues of the day, including the Chicago education system where he grew up. Malcolm’s connection to Eagle Rock comes as a result of our collaboration with Arkansas schools through Noble Impact. From May 2013:

Why does our education system look so similar to the way it did 50 years ago? Millions of students were failing then, as they are now — and it’s because we’re clinging to a business model that clearly doesn’t work. Education advocate Geoffrey Canada, who is head of the Harlem Children’s Zone, dares the system to look at the data, think about the customers and make systematic shifts in order to help greater numbers of kids. We have students from Harlem Children’s Zone here at Eagle Rock. From April 2013:

Do you have a favorite TED Talk video? Let us know about it in the comment section below.