Add anything here here or just remove it..
By Eagle Rock,
July 31, 20151 CommentMeet The Student 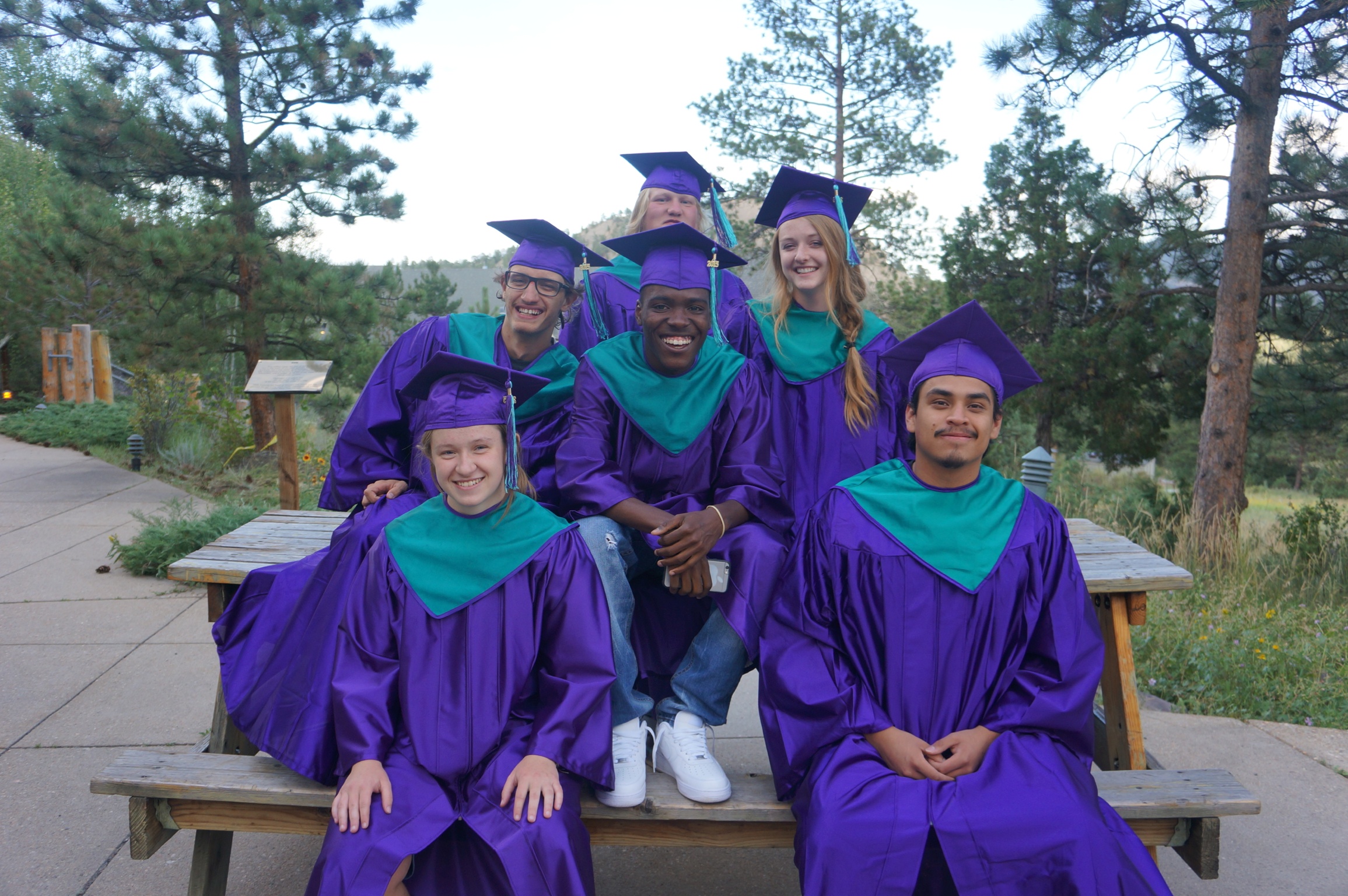 These half-dozen students will take the stage at 4pm Mountain Time, on Friday, August 7, here in Estes Park where we’ll celebrate their growth and development while at Eagle Rock and wish them well in their future endeavors.

Below is a little background on each graduate, along with a word of encouragement and advice to students and faculty from these seasoned Eagle Rock veterans:

Heather Johnston has proven herself to be a tremendous leader during her time here within the Eagle Rock community. She arrived in ER 58 (our 58th semester since the early-1990s), hailing from Dillon, Colo., which is just down the road.

Heather has been an active member of Aspen House for the past three years, during which she has added to her resume by leading morning exercises, participating in PeaceJam, acting in our campus production of In the Blood, and becoming a lifeguard. She was also a student co-teacher for the Gender and Violence course and served as a student leader for Spectrum, Eagle Rock’s gay-straight awareness group.

Heather says she was able to conjure up the energy for all these activities with her love of chocolate. She also has a special talent as a unicycle rider. Upon graduating from Eagle Rock, Heather will be attending Marlboro College in Vermont, beginning this fall.

Heather’s parting words of wisdom to Eagle Rock’s educators: Challenge yourself to be vulnerable with your students.

Gabriel Hernandez, who arrived at Eagle Rock in ER 56 from Los Angeles, is graduating as a proud member of Pinon House. Reflecting on his time at Eagle Rock, Gabriel is proud of his involvement in the ERS 301 class and is gratified that he took advantage of music-gathering opportunities to practice his performance skills.

Fun facts that many people do not know about Gabriel: He enjoys playing the drums and piano, and his favorite food — both in and out of Eagle Rock — is authentic Mexican cuisine. After graduation Gabriel plans to work at the Stanley Hotel in Estes Park and continue to volunteer at local fire stations.

His parting words for educators: Don’t ever, ever, give up on your students.

Daryl Jones Jr. (DJ) is another Pinon house graduate. He came to Eagle Rock from Harlem, N.Y. Most evenings, you could catch DJ on the basketball court. This love of the game — and most any athletic event for that matter — was displayed during intramurals, open gym time and most recently with the Eagle Rock basketball team. DJ was selected by his peers to be captain of the team, and displayed his leadership skills both on and off the court.

You could also hear DJ’s message of tough love to the community after a Pinon House win: “When my house went undefeated in ultimate Frisbee. 10-0, we destroyed every house out of love. No hard feelings.”

DJ said one of his proudest moments at Eagle Rock was facing — and dealing with — negativity, describing it as a key part of growing up.

After Eagle Rock, DJ plans to attend college and eat lots of delicious bacon. His advice to future graduates is to “Stay strong and keep your head up. I’ve probably been through and faced the same things as you. Don’t break down, and keep fighting. The best of both worlds is coming your way. All you have to do is believe in yourself and strive for the best.”

Amelia Howard arrived at Eagle Rock during ER 55, becoming an active member of Lodgepole House. Originally from Nelson, B.C. in Canada, Amelia says her proudest moments at Eagle Rock include being a part of our production of The Vagina Monologues and a choir member.

Amelia held a lot of leadership roles during her time here. She was a leader for the House Culture Committee, Magnificent 7, Art Angel, Guardian of Sound, and she was a co-student teacher for the Winter Ecology course. Additionally, she is pleased with her involvement in spreading awareness of women’s issues on campus (specifically hate crimes surrounding transgender women and sexual abuse).

Amelia’s future plans are to obtain a degree in neurobiology and naturopathy, with hopes to eventually establishing a medicinal field that incorporates teaching patients both natural and effective self-healing techniques. And you’ll always be able to find Amelia at her favorite local Korean barbecue restaurant.

Her advice to educators? “Knowledge is power that needs to be both pursued and challenged. One must consider education not a right but a privilege, and a good education is a doorway to self-awareness and development. Walk through that door, because once you do, you have the incredible opportunity and responsibility to assist in evolution mankind’s collective consciousness.”

Garrison Seizer is from Littleton, Colo., and has been an engaged member of the Eagle Rock community since ER 56. Garrison has been a leader in many realms, from Magnificent 7 and Aikido, to serving as a nature accountability community leader. But what he’s most proud of is being a campus wide Nerd Leader, rounding people up to play Minecraft, Dungeons and Dragons, and Larping. Basically, he helped create a safe space for people to nerd-out.

Garrison was also a cast member in the Eagle Rock production of Urinetown, and he says a highlight during his time at Eagle Rock was the internship he completed with Rocky Mountain National Park. This has also inspired his future dreams of becoming an Emergency Medical Technician (EMT) and firefighter after leaving Eagle Rock.

Garrison’s words of wisdom to educators: “Develop a relationship with your students. This builds trust and future success for them as students.”

Ziyad Johnstone joined Eagle Rock in ER 56. Ziyad hails from desert regions of Saudi Arabia and quickly became an asset to Aspen House. Ziyad was very involved in the music and theater department and was a cast member in three of the school’s productions: Urinetown, In the Heights, and Spring Awakening.

A fun fact about Ziyad is that this is just his third year in the United States. He has goals to become the Secretary General of the United Nations, capitalizing on his strengths of understanding languages and culture.

Ziyad’s favorite food is rice balls and he said he enjoyed expanding his culinary palate through the great food provided at Eagle Rock.

A piece of advice Ziyad has to all educators: “Your students are all unique one way or another. Learn about how they learn and teach based off of what works best with all students. Work sheets don’t work.”

Cheers to all of our ER 66 Graduates and best of luck in your future endeavors!