Add anything here here or just remove it..
By Eagle Rock,
October 25, 2018Leave a commentMeet The Team

Earlier this fall, Christopher lafrati was named our Adjunct Instructional Specialist for our Human Performance Center (HPC) — a role that has the Upstate New York native tasked with organizing morning exercise and intramurals, as well as overseeing safety in our Olympic size swimming pool, and teaching classes that help Eagle Rock School students establish and maintain healthy life skills. 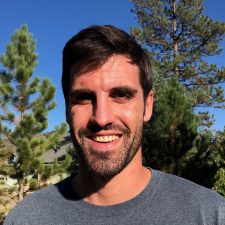 While Christopher is new to his current role on our instructional staff, he’s is no stranger to Eagle Rock, having served as part of the HPC team as a Public Allies Fellow in 2015/2016. And lucky for us, he’s also no stranger to taking on optional assignments, which this trimester includes teaching yoga and becoming a part of our school’s ensemble group.

Our new adjunct instructional specialist received a Bachelor of Science degree in exercise science from the State University of New York at Buffalo (aka University at Buffalo) and, following his fellowship year, returned to that school to earn a Bachelor of Arts degree in psychology.

We recently asked Christopher to fill us in on a few other details of his life, and below are his responses:

Eagle Rock: Where did you work prior to joining us at Eagle Rock School?

Christopher lafrati: Prior to coming here, I was working as a personal trainer for a YMCA and a stretch provider for Massage Envy. Both of these jobs allowed me to apply my knowledge of physiology to help people feel their best, but they didn’t always provide me with the opportunity to leave people with lasting knowledge.

Eagle Rock: Why did you choose to apply to, and then come to work for Eagle Rock?

Christopher: Eagle Rock provides me with the most challenges and the most outlets for what I view as my skillset. As a result, working at Eagle Rock has left me feeling more work fulfillment than I have received from any other job. In addition, the community is strong and a privilege to be a part of.

Eagle Rock: Where did you grow up and what did you want to be when you grew up?

Christopher: I grew up in Rochester, N.Y., and initially thought I wanted to do something involving criminal justice because my father was a police officer. But by the end of high school, I discovered my love of athletics and went in a different direction.

Eagle Rock: What super power do you have or would you like to have?

Christopher: It would be really cool to be able to fly, but I think it might be even cooler to be able to teleport (possibly more functional too). There would be the possibility of going on vacation every weekend while making time to see friends would be the easiest thing in the world. My concern might be the laziness I would acquire when I reached the point of teleporting to the kitchen for snacks.

Christopher: People seem to be surprised when I do singing performances. I think it has to do with the fact that I have a serious demeanor, so when I let loose on stage it’s usually unexpected.

Christopher: It has always been a dream of mine to be on Survivor. I watched it a lot when I was younger and have gotten back into it the last few years. At the risk of sounding overconfident, there’s a good chance I’d win. If I were to get voted off, it would come from putting too much trust in one other person, because establishing a strong partnership would be my main approach to winning.

Eagle Rock: Please tell us about your hobbies or interests outside of work.

Christopher: In my free time, I often find myself hiking, watching Netflix, traveling to Denver or Colorado Springs to see friends, singing or playing video games. Lately though, my favorite pastime since returning to Colorado has been hanging out with my landlord’s dog.