Add anything here here or just remove it..
By Eagle Rock,
February 11, 20141 CommentMeet The Student

Today, we’re starting up a new series of blog posts that are written by – and written about – our students here at Eagle Rock. And to kick things off, we’re placing the spotlight for this initial post on Ashley Hernandez, a Fort Worth, Tex., native who comes to Eagle Rock from Lafayette, Colo. 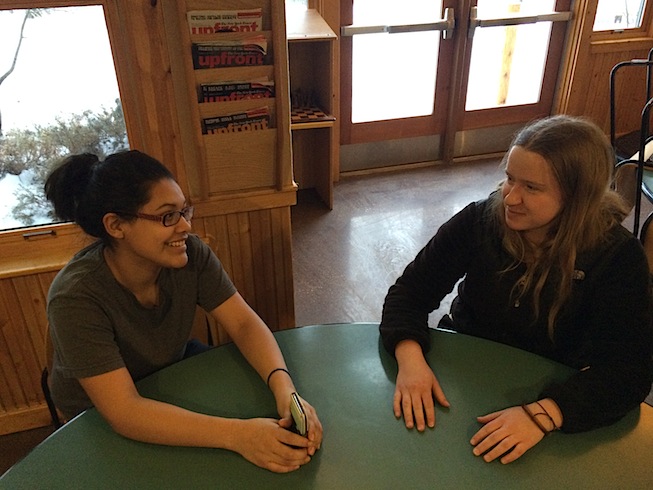 Fellow student Heather Johnston, who asks some pretty good questions about this new Spruce House resident whose sister also attended Eagle Rock, is interviewing Ashley. Ashley says she arrived at Eagle Rock with the goal of discovering something new. Here’s her story:

Ashley: It’s fun, and also stressful. Since I’ve been at Eagle Rock, I find I argue less with my family.

Heather: What did you think when you first got to Eagle Rock?

Ashley: It was overwhelming. It was something different from what I was used to… It was scary at first.

Heather: Yeah, I think we can all relate to that. So thinking about Eagle Rock now, what’s your favorite part?

Ashley: Intramurals. We get to play, and be competitive and active. It’s a good time to get some anger out.

Heather: Could you tell me about some personal growth you’ve worked on recently?

Ashley: I’ve been working on leaving my problems and personal stuff at the door for classes. I can be so much more focused if I don’t let stuff at home and in other parts of my life distract me.

Ashley: The Science of Swimming was one of my favorites. I learned how to swim the right way. We had a lot of fun in that class. It was also the instructor — Kirsten’s — last trimester, so it was good to have a class with her before she left.

Heather: Is there an instructional specialist here you like that you could tell me about?

Ashley: I like so many. I guess I really like Janet’s classes. She makes it feel very open for questions, so you can ask anything without worrying about if it sounds stupid.

Ashley: Wilderness was fun. It was dramatic too. One time, I got in a fight with my patrol-brother over some M&Ms. That helped me learn to be more understanding of people — especially when they’re hungry and tired.

Heather: I definitely had some fights over food on Wilderness. Do you have plans for after you graduate?

Ashley: Yeah, I want to go to college. I’m excited to get my drivers license and move out.

Heather: What do you want to accomplish in the rest of your time at Eagle Rock?

Ashley: I want to plan more for what I’m going to do after I graduate. I’m looking for something to do before college. Service opportunities or other little things. And I want to find a place to move into.

Heather: Thinking about your experience at Eagle Rock, is there anything else you’d like to add?

Ashley: As I’ve been thinking about graduation, I’ve realized that Eagle Rock has taught me so much personally that will help me for college. Academics aren’t everything. You have to have a good mentality and a good attitude to go to college, and Eagle Rock has helped me learn that.