Add anything here here or just remove it..
By Eagle Rock,
December 12, 20192 CommentsMeet The Student

This Friday we host another graduation ceremony — an event celebrating students who took it upon themselves to become so actively engaged in their own education that they’ve each earned their high school diploma, which for some wasn’t considered possible just a few short years ago. This time around, we’re celebrating the remarkable accomplishments of Tallie Bradle, Hana Dewhurst, Lydia Raymond, and Edna Mendez.

For those who cannot attend the event on our campus in Estes Park, Colo., the entire graduation ceremony will be broadcast live starting at 4 p.m. (Mountain Time) on Friday, December 13, 2019 via the Eagle Rock School and Professional Development Center Facebook Page. 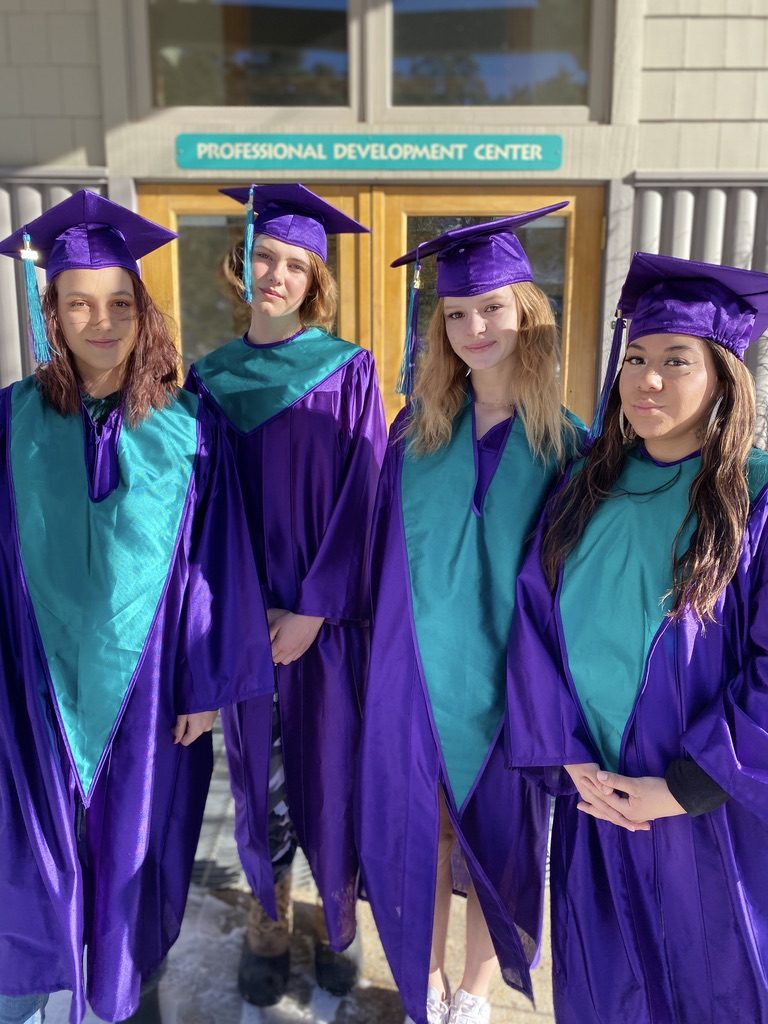 Below is a short rundown on each graduate, including information about their activities while at Eagle Rock, their post-Eagle Rock goals and objectives, and for some, advice they have for students enrolling in our unique residential community.

Edna (who arrived at Eagle Rock in the fall of 2016) is from San Fernando, Calif., an area northwest of downtown Los Angeles. On campus, she was a member of Juniper House.

During her time here, Edna took full advantage of many leadership opportunities and was heavily involved on campus. As a member of the Student Ambassador Program, she led campus tours for visitors and served on informational panels. Additionally, she was a kitchen patrol leader, house leader, and wing leader. To round out her commitment to leadership and service, Edna mentored three students over the course of her enrollment. All these combined experiences capture Edna’s presence on campus and how she was like an older sister to many of her fellow students.

As Edna has reflected on her experiences and learning at Eagle Rock, she described a peak moment during the six-mile run back onto campus at the end of her three-week wilderness orientation course. She said completing that run brought a sense of accomplishment and fulfillment for all the work and personal growth achieved during her time in the Gila Wilderness area of New Mexico.

Looking ahead to life after Eagle Rock, Edna plans to continue her education, focusing on herself and upholding her commitment to personal objectives she’s set for herself. This trimester, during Explore Week, Edna joined the Life After Eagle Rock team on a trip to Los Angeles, where students toured schools like Santa Monica College, the University of Southern California, and many others. She called that trip a full-circle moment, returning back to her hometown with college on her mind, backed by her arsenal of ambition.

To incoming students, Edna advises them to “not get influenced. Be yourself. Reach out for help and support. You can’t do everything on your own, and you definitely can’t give up during hard times.”

Lydia (who entered Eagle Rock in the fall of 2016) hails from Waterbury, Vt., and was a member of Piñon House during her entire time at Eagle Rock.

Lydia describes her first day on campus while moving her gear to Piñon House. One of her new housemates greeted her warmly and then helped her move in, all the while describing how he and others would help her learn the ropes. She recounts it as “a distinct fresh start. It felt magical.” Her appreciation for Eagle Rock has manifested in how she capitalized on the numerous opportunities available at the school. In her time here, she led a poetry group, participated in an LGBTQ+ affinity club, served as a kitchen patrol and house leader, supported evening programming as one of seven students on Mag 7, and completed a summer-long interpretive internship at Rocky Mountain National Park. (Mag 7 is a campus group comprised of seven veteran students focusing on leadership roles and opportunities here at Eagle Rock.)

Lydia counts personal growth as among her proudest accomplishments while at Eagle Rock, attributing that gift to tenacious campus involvement, devotion to her classes, and commitment to her own development. However, Lydia wants to recognize L’Tanya Perkins, Eagle Rock’s admission associate, for a good share of her development. “I would not be the person I am today without her,” Lydia remarks. She describes one of her favorite moments with L’Tanya as a time when they were eating dinner together, and L’Tanya told her, “You have grown so much, and I am so proud of you.” Lydia expresses a lot of gratitude for Eagle Rock and all it has provided her.

Looking ahead, Lydia will spend time working in order to save up money to earn a degree in film studies beginning in the fall of 2020.

Hana (enrolled at Eagle Rock in the winter of 2018) comes from San Diego, Calif. During her time here, she was a member of Lodgepole House and is graduating from Piñon House.

Since her arrival on campus, Hana demonstrated a clear commitment to her time here, putting her maximum effort in all of her classes and earning credits quickly. Alongside a commitment to her classes, Hana pushed herself to develop as a leader through a variety of ways. She served as a wing leader in Lodgepole House, was a morning exercise leader, and took the lead in a Spanish enrichment class.

Additionally, one of her capstone experiences at Eagle Rock was being part of the Life After Eagle Rock trip to Los Angeles, to tour many colleges and universities in the greater Los Angeles area. Aside from visiting different schools, she and the other students on the trip had the opportunity to explore Southern California and see staples of the area such as the Santa Monica Pier and Hollywood Boulevard. Hana said the trip served as a great way to see what life after graduation can look like, as well as a memorable experience with close friends.

Thinking about post-graduation, Hana looks forward to attending community college in Santa Monica before transferring to a four-year university.

Tallie (who entered Eagle Rock in the summer of 2017) is from Thousand Oaks, Calif., and has been a member of Ponderosa House since her arrival.

During her time with us, Tallie focused on exploring her passion for art and connecting other students to that passion. Out of her seven trimesters at Eagle Rock, five were fully devoted to serving as an Art Angel. In this role, she had the responsibility of opening up and closing our on-campus art building so other students could come in and work on their projects. Aside from this, she also served as a kitchen patrol leader for two trimesters, helping coordinate her house team as they helped prepare and clean up meals.

Looking ahead, Tallie plans to return to California and enroll in community college before matriculating to a radiation therapy program. Although she has several other interests in mind — including working at wineries in the Malibu area near her hometown — her overarching objective is to use radiation therapy to help animals with health complications.

Tallie’s advice to incoming students is to acknowledge how time moves fast, and you must move along with it. She believes Eagle Rock is a place to grow rather than to remain stagnant. As she moves on to her next step, Tallie wants to extend her utmost gratitude toward Ponderosa House. And she will dearly miss fellow student, Dalan, who she believes was instrumental in keeping her grounded and centered during her time here.

Don’t forget! Friday’s graduation ceremony begins at 4 p.m. (Mountain Time) and will be broadcasted live on the Eagle Rock School and Professional Development Page on Facebook.