During their time here, these new and returning fellows will take an active part in Eagle Rock’s residential and community-based school, as well as support our Professional Development Center’s national work. Each fellow has shown a passion for alternative teaching and progressive approaches to learning, youth development and empowerment. And each is expected to support our objective of re-engaging high-school students in their education. 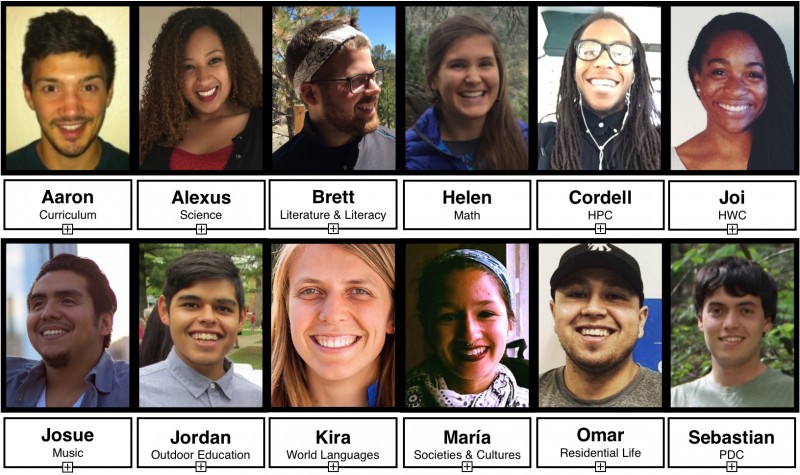 Here is a short biography and educational history of each fellow in the cohort:

Aaron was brought up in Ohio and graduated from Clark University where he studied political science and environmental studies, and played for the men’s soccer team. Aaron most recently resided in upstate New Hampshire where he worked at an alternative boarding school. A few of Aaron’s interests include watching and playing soccer, rock climbing, ultra-running, and learning about human anatomy and physiology.

Alexus is originally from San Diego, Calif., but found her career passion while majoring in educational science at the University of California at Irvine. She spent much of the last four years exploring nonprofit organizations such as the Freedom Writers Foundation and Camp Fire After-School program. Along with her recent volunteer work at her church and as secretary of 100 Black College Women, Alexus enjoys cycling, playing sports, and her favorite pastime — an intense murder mystery television show. If Shonda Rimes wrote it, Alexus has watched it and loved it!

Brett is originally from Hillsborough, N.J. He attended Goucher College in Towson, Md., where he studied creative writing and art. He lived in Baltimore for five years after graduating from college where he worked at Genesee Valley Outdoor Learning Center and earned his Masters of Arts in teaching from Towson University. He spent the last year as our Literature and Literacy fellow and looks forward to continuing in that role this year. Brett’s interests include ultimate Frisbee, painting, drawing, disc golf and board games.

Cordell was born in West Chester, Pa., but was raised in Richmond, Va. He earned a bachelor’s degree in psychology with a minor in black studies from Randolph-Macon College. Cordell taught math at an alternative school prior to joining us here at Eagle Rock, and his free time is spent playing sports, listening to music, and binge-viewing his favorite Netflix shows.

As our 2015-16 Math Fellow, Helen spent her time discussing ideas with students and being inspired by their curiosity and creativity. Helen concentrated in math and art at Hamilton College in Clinton, NY, where she discovered that mathematics is the purest form of artistic expression. In recent years, she has led backcountry trips for high school and college students, taught on a farm, and coached skiing for the Adaptive Sports Center of Crested Butte, Colo. Helen is excited to serve as Eagle Rock’s math fellow for a second year. Some of her interests include gardening, skiing and board games.

This second-year fellow is originally from Virginia. She attended Scripps College in Claremont, Calif., where she studied sociology and music. Joi is continuing to enjoy her Health, Wellness and Counseling Fellowship, where she spends her time with students and exploring Colorado. Some of Joi’s interests include traveling, listening to music and spending time with family and friends.

Josue is originally from Chicago where he attended VanderCook College of Music, studying music education. Josue has worked with multiple high school marching bands around Chicago. He has also been a part of Drum Corps International and Winter Guard International playing mallet keyboard percussion. Some of Josue’s interests include traveling, watching sports, and spending time with friends and family.

Jordan is from Fort Wayne, Ind. He attended Earlham College where he studied biology. Before joining the 2016/2017 cohort of Eagle Rock Public Allies fellows, Jordan instructed for the National Outdoor Leadership School (NOLS), as well as two prior wilderness courses with Eagle Rock. When he’s not in the field, Jordan enjoys baking, climbing, sharing meals with friends and staying active.

Kira is originally from Olympia, Wash., and studied biology at Carleton College in Northfield, Minn. Prior to Eagle Rock, she was living and working with the School for Field Studies at a biological field station in Peru, then led backpacking trips in the Alps this past summer. Kira loves to sing, read, frolic outside, and play Frisbee.

María grew up in central New Jersey and attended Northeastern University in Boston, studying human services and sociology. She also helped clients find affordable housing at a healthcare nonprofit in the city. Some of María’s interests include cooking, board games, befriending dogs, talking about how amazing her grandma is, and spending time at the beach.

Omar is from Richmond, Ca. He attended a small liberal arts school in New London, N.H., where he obtained a degree in sociology. Omar enjoys playing sports, hanging with friends and making the most out of life. Omar has a passion for people and seeing the world around him smile.

Sebastian is originally from Los Angeles, but grew up in Buenos Aires, Argentina. He graduated from Colorado State University in Fort Collins with a double degree in political science and international studies and a minor in Spanish. Sebastian spent the last few months in Fort Collins with friends and doing some work at the university. Some of his interests include playing sports, especially soccer (he says he’s a stereotypical Argentine who loves the sport in every form), learning about the education system in the United States and around the globe, traveling and spending time with friends.