Add anything here here or just remove it..
By Eagle Rock,
March 11, 2016Leave a commentMeet The Team

Eriq Acosta is our cultures & societies instructor, and his disparate heritage alone enhances his qualifications for the job. Eriq acquired his Navajo, Pueblo and Chicano origins from his mother’s side of the family, along with Comanche and Mexican blood from his father’s side. 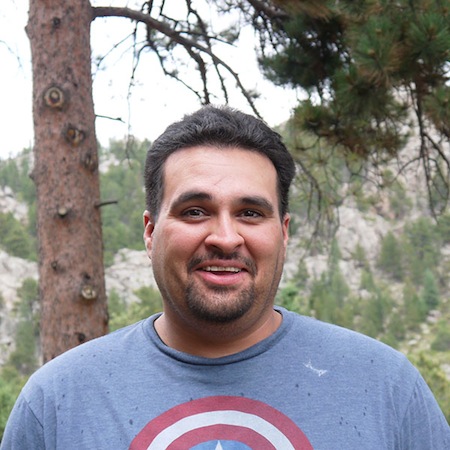 He has lived and worked in both Los Angeles and New Mexico. In LA, he worked for the United American Indian Involvement as the lead evaluator for the program. He also taught traditional American Indian drum co-created the Los Angeles Native Youth Leadership Journey.

Here are some more interesting facts about Eriq, who joined the Eagle Rock School & Professional Development Center community in the fall of 2015:

Eagle Rock School: What did you do prior to coming to work for Eagle Rock?

ER: What year did you graduate from college and what was your major?

Eriq: I earned my bachelor’s degree at Colorado State University where I majored in anthropology and minored in geology. I received my master’s degree in nonprofit management from Regis University. While at CSU, I was elected vice president and president of the Native American Student organization.

Eriq: I like outdoor recreation, art and working and driving cars. I have a passion for building Ford Mustangs.

Eriq: I don’t watch that stuff! But I do like zombies and I’d love to be on the Walking Dead!

Eriq: Seeing the students wearing their cap and gown at the end of the trimester!

Eriq: I love to sing.