Add anything here here or just remove it..
By Eagle Rock,
July 23, 2015Leave a commentMeet The Team | Outdoor Education 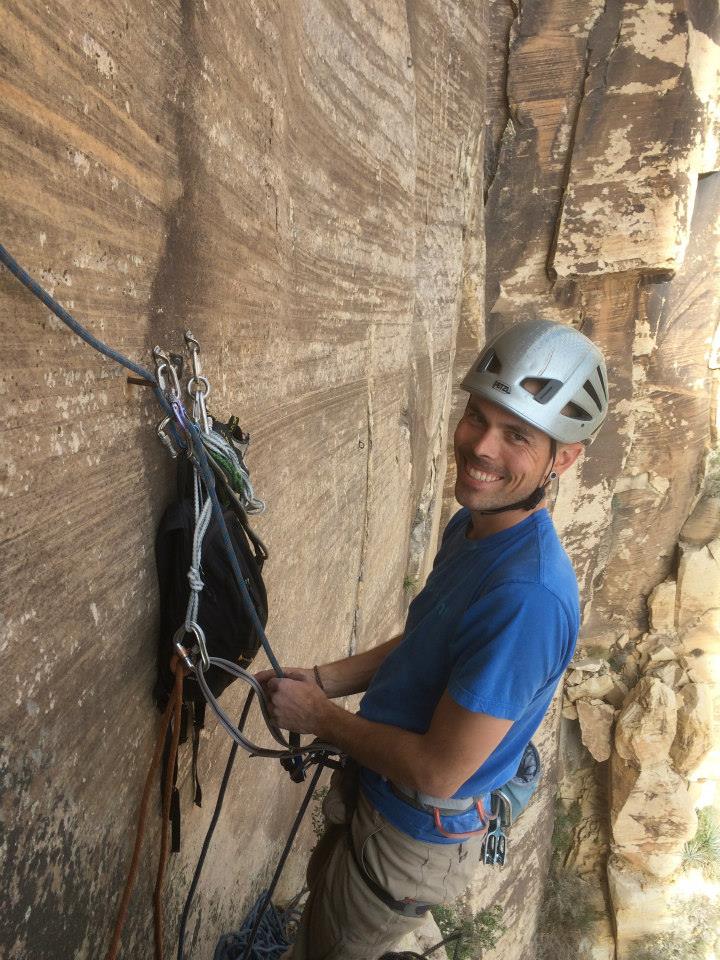 The one place you’ll seldom find our latest featured Eagle Rock educator is in the classroom. Matt Bynum is our outdoor education adjunct instructor and you can’t do all that much hands-on teaching about the Great Outdoors when four walls topped by a ceiling surround you.

Matt starts each trimester either instructing or directing our Wilderness Orientation course, and then, if time permits, he teaches an Explore Week course. The second half of each trimester finds him busy managing the wilderness gear, developing curriculum for our outdoor offerings, coordinating the Veteran Pin system, serving on our Risk Management Committee, and teaching the occasional wilderness class.

We sat Matt down — not an easy task — and quizzed him on his background and interest in progressive education.  Here’s what he had to say:

Eagle Rock: Where did you receive your college degrees?

Matt Bynum: I graduated in 2006 from Western State College in Gunnison, Colo. I majored in outdoor leadership and minored in environmental studies. The classes I took there helped get me really excited for outdoor education while building a solid base from which to work. I loved the hands-on approach and small class sizes. I can’t thank those professors enough.

Matt: Before my Public Allies fellowship in 2009, I worked as an instructor and course director at Outward Bound in Colorado for five years. These were predominantly mountaineering courses. I also did a summer of trail work, taught environmental science, and guided outdoor trips at my college. Immediately before coming back to Eagle Rock in 2013, I was teaching at a public school in Commerce City through Goodwill. When I was not instructing, I spent time traveling and climbing in Patagonia, Ecuador and Asia.

Matt: A friend in college first told me about Eagle Rock. A few years later, I was looking for meaningful work after a few seasons of living in a ski town and doing restaurant jobs. Eagle Rock came back on my radar, so I applied for the Public Allies Fellowship in Outdoor Education. What attracted me to Eagle Rock initially was the philosophy and values of the school. I liked that it offered an opportunity for youngsters to turn their lives around in a new environment. I liked that it held students to high expectations. I liked the focus on community, and I liked the interdisciplinary and experiential class model.

Matt: My primary passion is rock climbing so I try and get out as much as possible with friends. I’ve recently rediscovered mountain biking, so I’ve been spending a lot of time on the trails around my house. I also enjoy trail running, reading, gardening and watching Game of Thrones with my girlfriend.

Matt: I think I would be on the Real World. I don’t even know if that show is still on the air. I would have a different take on it though. I would help the contestants run circles, build community, and incorporate mediation into the silly conflicts that occur. OK, so maybe I wouldn’t “win” on the show, but I would try and help those folks be a little nicer and deal with their issues.

Matt: One Eagle Rock success story that comes to mind is Song Candea. Song’s evolution as an Eagle Rock School student and community member is, to me, one to be exemplified. He came in from a pretty rough go at his last high school and didn’t see himself as a leader. Throughout his career, he took many different art, music and outdoor classes. He developed his strengths and passions with vigor. In ER 64 (the 64th semester of Eagle Rock School’s existence), Song served as a student instructor with me on the fall wilderness course. He is currently working at Camp Manito-Wish as a camp counselor. I am inspired by Song’s evolution at school and his ability to take charge of his own learning.

Matt: Punk rock influenced me more than almost anything in my life. It made me aware of social and political issues, helped me challenge the status quo, offered an energy release, and helped mold me into a leader in a number of ways.