Add anything here here or just remove it..
By Eagle Rock,
December 26, 2014Leave a commentMeet The Team 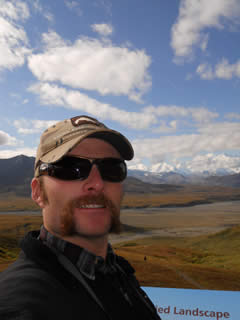 If it’s an activity that doesn’t take place underneath a ceiling, Jesse Beightol  probably has something to do with its success. Jesse is the outdoor education instructional specialist here, and his classroom consists of the hundreds of acres of forests, streams and meadows surrounding our mountainside campus. Does that mean he wears a lot of sunscreen? You’ll have to ask him that question yourself.

We brought Jesse indoors long enough to ask him a few questions about himself:

Jesse: Most immediately I was attending graduate school at the University of New Hampshire, earning a Master of Science degree in outdoor education. Before that I spent about eight years working as a wilderness instructor for the National Outdoor Leadership School, Wilderness Inquiry, Kent Mountain Adventure Center, Wintergreen Dogsled Lodge and Eagle Rock.

Eagle Rock: What first attracted you to Eagle Rock?

Jesse: I led my first wilderness course at Eagle Rock School (ERS) in 2000 and really enjoyed the experience. It was an incredibly challenging course for me and I learned a lot about students, Eagle Rock, leadership, and myself in general. Luckily, I was excited to return for more courses in the future. I was most intrigued about working with and learning from students who came from a wide range of backgrounds. I also liked the idea of being able to continue working with students after the wilderness trip was over. Most importantly, ERS challenges me to learn, grow and be a better person every day. I also think it is a place that I can be creative, engaged and work with students to create positive change.

Jesse: I like to ski, raft, read, challenge myself, build things, ride my Harley, and be outside, do CrossFit, fish, play ice hockey, hang out with Denise, explore new places and see my family.

Jesse: Deadliest Catch. I would be on the show because I love Alaska and fishing. I would be kicked off because I am not very good at fishing!

Jesse: Marwan Johnstone came to ERS from Saudi Arabia. He was incredibly shy and dealing with a tremendous cultural transition. Marwan had one of the toughest wilderness patrols in recent memory and just wanted to have a positive experience. I always enjoyed hiking into the Superstition Wilderness to check in on Marwan, but I was worried about how he would do with such a rough group. He persevered and was stronger for it. He began to find his voice and really grow up at ERS. Though it wasn’t always the smoothest path, Marwan grew into a strong and proud young man at Eagle Rock. He became a CrossFit athlete, a National Park ranger and a great friend. He is now attending Evergreen College in Olympia, Wash. I will always be connected to Marwan and I think that he truly made the most of this opportunity.

Jesse: I started playing ice hockey when I was seven (two years later than my Minnesota peers). My coach didn’t want me to be on the team because I couldn’t skate and he didn’t want to teach me. My father wouldn’t have any of that and I just started working at it. I got an award for Most Improved Player that year and eventually played college ice hockey. That taught me to never let anyone tell me I can’t accomplish something I want to achieve.