Add anything here here or just remove it..
By Eagle Rock,
December 15, 20161 CommentMeet The Student

With as much fanfare as such occasions warrant, the four members of this trimester’s graduating class will be honored beginning at 4 p.m. tomorrow in the Human Performance Center here at the Eagle Rock School and Professional Development Center in Estes Park, Colo..

Graduates include Javon Banks, part of ER 65 (the 65th incoming group of students to arrive at Eagle Rock since its founding in the early 1990s). Others include Stacy Escobar, Alysha Dan and Katie-Lynn DeRaps, all members of ER 64. 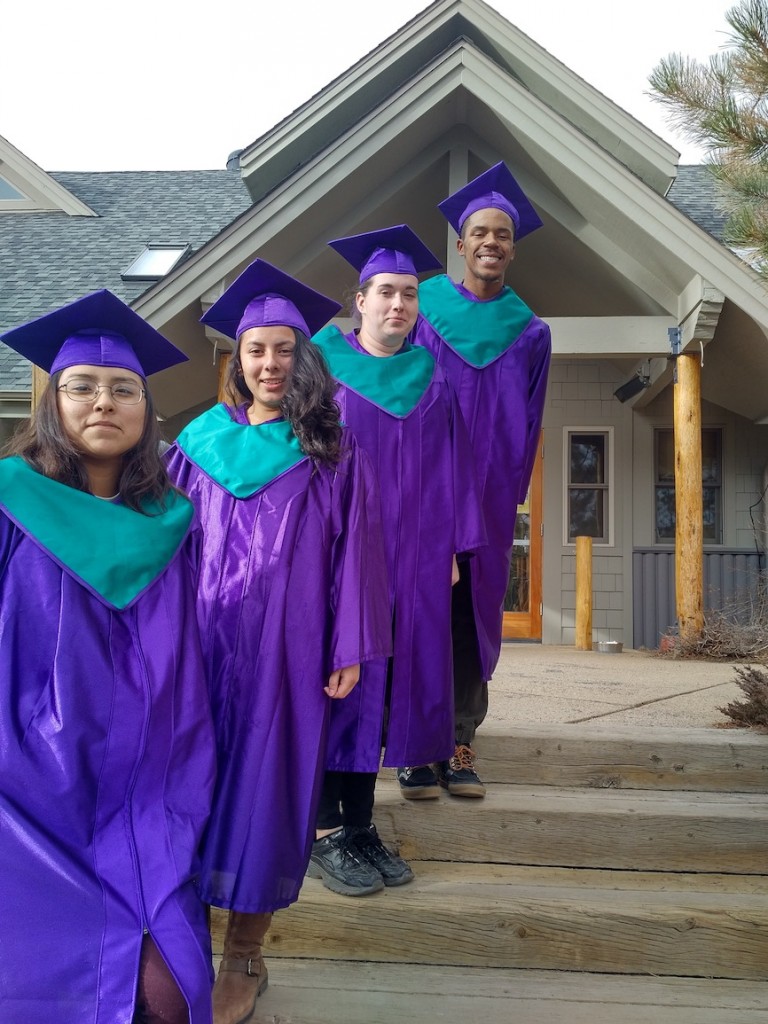 This quartet of Eagle Rock School grads has completed the requirements for graduation and has participated in a number of magnificent activities during their time here that most high school graduates can’t even imagine. And as a community, we can’t wait to see what great achievements await them in the future.

If you can’t make it to campus tomorrow afternoon, the graduation ceremony will be broadcast live on our Ustream channel. To view the event, visit:

We asked each of our four new grads to offer up a short note about their time spent at Eagle Rock, some sage advice for incoming students, and what the future holds for them. Here are their responses:

Javon Banks: Arriving at Eagle Rock in January of 2015 from New Jersey and pointed himself in the direction of Pinon House, Javon became involved in Power to the People, MUTE, Glow, and the Eagle Rock Student Union. He is currently involved in political activist groups, which as you’ll see, he plans to keep up with throughout his life going forward.

His future plans are college, followed by starting up a nonprofit organization that would help aspiring artists. Javon also hopes to make a difference in the world and become part of various social movements. This is directly related to his passion for traveling and learning about different cultures and societies.

His advice to new students and to those considering Eagle Rock? “If you have an idea, go with it. Don’t be stopped by someone else. People are always going to disagree with you, but keep pushing forward toward your goals and dreams.”

Stacy Escobar: Stacy hails from Los Angeles, arriving at Eagle Rock in September of 2014 as a part of Ponderosa House. She says her proudest moment was being part of the Eagle Rock mission because she truly believes in it. In fact, Stacy is taking that mission with her wherever she ends up going and whatever she ends up pursuing.

Her participation in Latina Diaspora taught her much about the Latino culture and helped other students learn more about their family heritage. As a result, she wants to become an activist — especially in causes that relate to the Latino community. She also wants to become an immigration lawyer and help those who are struggling to gain citizenship in the United States.

Her advice to incoming students: “There are people in this community that want to see you succeed, but you need to put yourself and your education first.” She warns that sometimes an overabundance of volunteer work can distract you from your main objective, which is graduating.

Alysha Dan: Alysha also arrived in the fall of 2014 and is a member of Aspen House. The Albuquerque, N.M., native said her biggest joy at Eagle Rock was spending time in the art room, specifically creating murals that are now showcased in Rocky Mountain National Park.

One piece of advice she wants to impart to incoming students is to utilize the resources Eagle Rock has to offer. Alysha said there are plenty of buildings that can be used for many things, specifically mentioning the art building, the Learning Resource Center and the Schoolhouse. She said students should also take advantage of resources outside of the school, such as outings to Denver and other parts of Colorado or just going to the movie theater.

Her future plans include studying art — hopefully at Rhode Island School of Design (RISDI) . Post-graduation, she’d like to be self-employed, “own a corner store,” or work for an interior design company — specifically designing spaces for youngsters.

Katie-Lynn DeRaps: Known as “Momma” by her peers, Katie-Lynn comes from Fort Wayne, Ind., and was a member of Pinon House, where she was a great support system for her house brothers and sisters — hence earning the nickname.

Her future plans aren’t specific, but can be generalized by her notion of “going with the wind.” She mentions further education to become a nurse, but would also like to be a massage therapist and travel the world to learn more about other cultures. Traveling is a major passion, because she loves to talk to new people and learn about individuals from very different backgrounds.

As for advice to newbies, Momma says, “This place can be academically challenging if you make it challenging. Don’t sell yourself short and make everything easier for yourself.”