Editor’s Note: You may recall Rebecca Fenn. She was a 2013/2014 Eagle Rock Public Allies Fellow who initiated a study to better understand moral and ethical code development here at Eagle Rock. One year removed from her Fellowship and Rebecca is back (in a literary sense) with a summary of her findings, which suggest among other things that bridging the gap between school and family might be the first place to look in the study of moral and ethical curriculum. 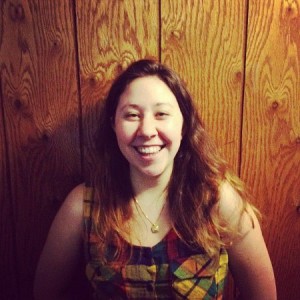 Relationships matter. They matter in school, in life, with students, with co-workers, leadership, policy-makers and even with the elk that share your back yard.

No matter the organization, relationships shape climate, and at the Eagle Rock School and Professional Development Center in Estes Park, Colorado, I found community members use their relationships to fuel education through daily gatherings, social-emotional graduation requirements, moral and ethical code development and residential life.

When Eagle Rock students develop their moral and ethical codes every trimester, they draw on information they learned from relationships with other people.

This transference of knowledge and beliefs through meaningful relationships continues to fascinate me. So much in fact that in the year following my time spent as the Life After Eagle Rock Fellow, I attended graduate school where I conducted a qualitative research study on moral and ethical code development at Eagle Rock School.

In my study, I used social network analyses — a research method that quantifies social relationships into maps — to determine where it was exactly that students were receiving their moral and ethical advice and how the Eagle Rock community could use this information to better understand its own moral and ethical code program.

The research began with a survey in which each student was asked to list up to 10 people to whom they turned for moral and ethical advice. From there I created a sociogram, or map, of these relationships and looked for trends. (It is important to note that because this study only looked at students who responded to the survey, the sampling was self-selected and no broad claims can be made about trends in the school as a whole. However, confining the analysis to the data provided, it still lends insight into the moral advice-seeking behavior of this self-selected group of students.)

I found one of the most important findings of this study to be the fact that family is essential to moral development. This finding matches the research of prominent child psychologists such as Goleman, Freud, Piaget and Kohlberg, who say that a student’s parents, caregivers and teachers are the primary sources of moral and ethical learning for children and young adults. Looking at the sociogram below you can see that 15 out of 19 of the sample population reported a family member in their moral advice-seeking network.

Figure 1 (below). Sociogram of the entire network sampling, in which boxes represent family members, black dots represent surveyed students, and blue dots represent all other individuals. 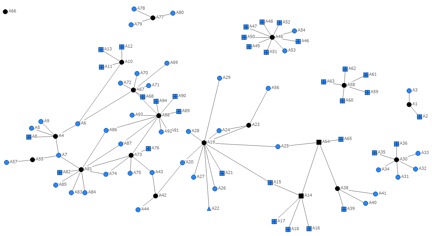 Using the same line of thinking, students who had attended school at Eagle Rock longer were more morally interconnected with people at Eagle Rock. This suggests that as students become more a part of the community they begin to feel more connected and are better able to go to their peers and teachers for moral advice.

Although the importance and validity of social and emotional learning is widely known, it is not widely incorporated into educational practice. Emotional abilities, often labeled “soft skills,” are often entangled in concepts of religion, culture and family and are quickly dismissed as unimportant. This study suggests that it is precisely the personal aspects of social emotional learning that fuel it and make it so important to student development.

Social-emotional education is one of the most effective methods of developing emotion regulation skills in youth, and according to Richard Davidson, an expert in emotional intelligence. Students who do not have strong emotion regulation skills often experience anxiety and other emotional symptoms that intervene with mental tasks. Unfortunately, because there is no broadly accepted method for developing, assessing and teaching emotional skills, many policy makers and educators remain stagnant on their implementation.

By studying the students at Eagle Rock School, I learned that bridging the gap between school and family might be the first place to look in the study of moral and ethical curriculum. Familial relationships are strong, and students who feel the support of present adults and family are more likely to have people to go to when something goes wrong — or for that matter, when everything’s just fine.

Schools that embrace this type of education continue to develop teaching and learning practices on their own, observing their own students and communities for evidence of their success, and learning from each other for ways to improve.

A strong foundation of self-esteem, moral understanding and emotional intelligence can change the course of a person’s life. And by investing time and energy into relationships, you can begin to construct that foundation.

About The Author: Rebecca Finn is a student at the Harvard Graduate School of Education in Cambridge, Mass. Previously, Rebecca was the Life After Eagle Rock Fellow at the Eagle Rock School and Professional Development Center in Estes Park, Colo., where as a part of the Public Allies Fellows program, she developed strategy and implemented tactics for improving Eagle Rock student high school graduation, college acceptance, and student employment rates. To learn more about Rebecca’s research into moral and ethical code development, email her at rbf113 at mail dot Harvard dot edu.