Add anything here here or just remove it..
By Eagle Rock,
May 7, 2020Leave a commentLife at Eagle Rock School

Here we are at the start of May, preparing for our 81st trimester at Eagle Rock, and COVID-19 has our community operating in a virtual world that’s powered by Internet-based technologies. As we look back on last trimester — seemingly a lifetime since we were on campus together — we want to highlight one day in particular. That important day was Feb. 22 during Black History Month. Coordinated by Nia Dawson and her team of Student Services Program staffers, our own Black Lives Matter (BLM) Day was truly a success.

Among the highlights of this year’s Black Lives Matter (BLM) Day, held on campus at Eagle Rock School in mid-February, was a screening of the award-winning documentary film “Agents of Change,” featuring Danny Glover.

This marks the third consecutive year that Eagle Rock has commemorated BLM Day, and this year’s theme was “Say It Loud!” The objective for the day was for students to be in action around an issue that matters to them, and to get things rolling, students and staff viewed the 66-minute documentary that was co-produced and directed by Abby Ginsberg and Frank R. Dawson.

In addition to Glover, the film features Ramona Tascoe, Harry Edwards, and Juanita Tamayo Lott. “Agents of Change” documents how students changed the curriculum of American universities in the late 1960s by being in action — through protest. The film received Best Documentary honors during Pan African Film Festival 2016.

“Agents of Change” examines racial conditions on college campuses and throughout the country that led to the protests in the 1960s. The film’s subjects find themselves caught at the crossroads of the civil rights, black power, and anti-Vietnam war movements during a pivotal time in America’s history. Co-producer / co-director Dawson is the Interim Dean of Career Education at the Santa Monica College Center for Media and Design and a former chair of that college’s Communication and Media Studies Department. He also happens to be the father of Eagle Rock’s Student Services Program Manager, Nia Dawson.

Ginsberg, a Peabody award-winning director, has been producing compelling documentaries about race and social justice for more than three decades. Her 2017 film, “And Then They Came for Us,” featuring Star Trek star George Takei, received Special Jury Prize for World Social Justice at the 9th Queens World Film Festival in 2019. 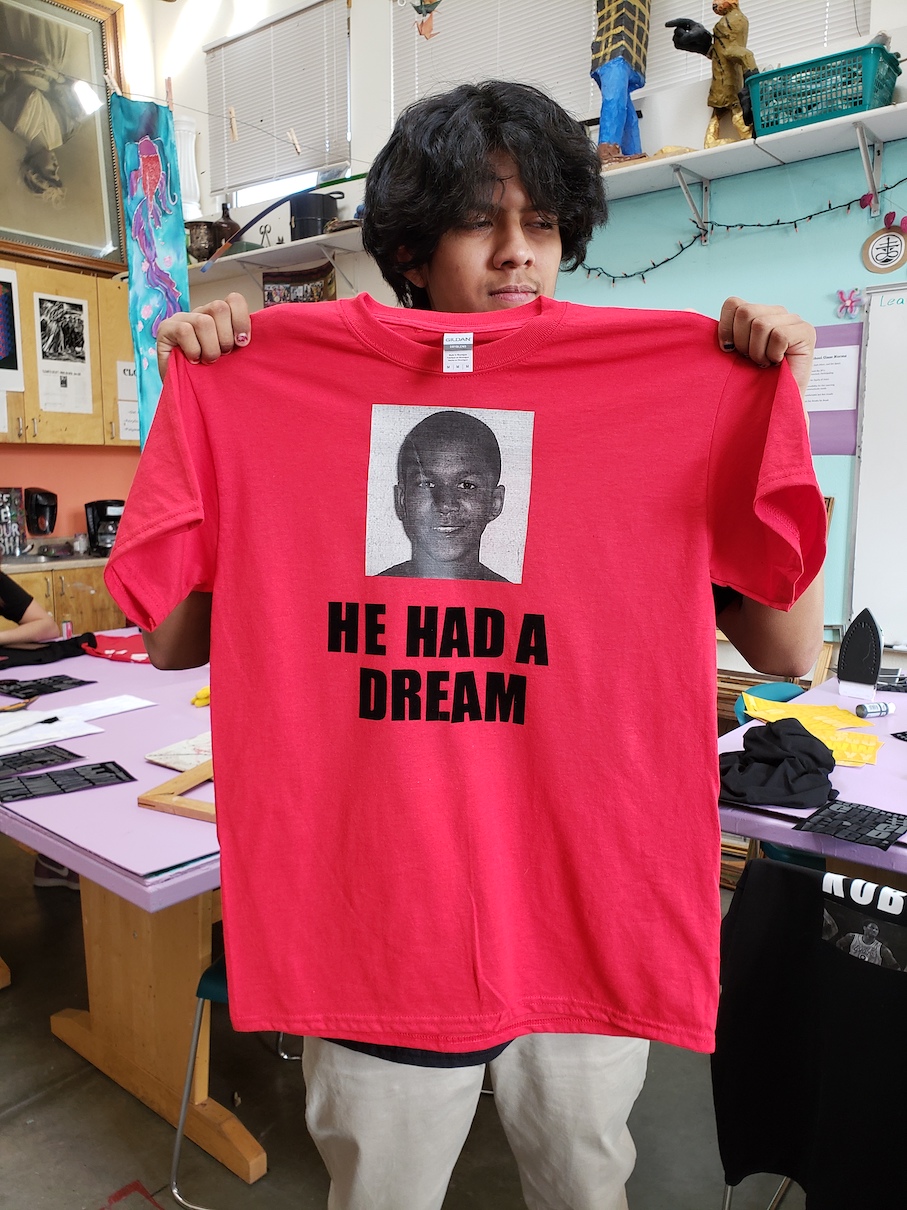 Following the screening, Dawson met with students via Zoom, where he moderated a discussion and answered questions from the audience. Afterwards, students were asked to create a campaign that could become viral, based around a message about Black lives mattering. As a result, students created innovative T-shirts using our in-house screen sprinting tools, wrote songs, and created print ads that conveyed messages in support of Black lives mattering.

Finally, the students were asked to give a written response to the question: Do black lives matter? And why? These answers — many of them inciteful — were posted on a bulletin board in our on-campus Lodge. Here are just a few of those writings:

Black Lives Matter (BLM) is an international activist movement. Originating in the African American community, BLM campaigns against systemic racism and violence towards black people. BLM chapters regularly organize peaceful protests that center around speaking out against police killings of black people, and broader issues such as racial profiling and inequality in the United States’ criminal justice system.

As we continue to navigate social and emotional learning with our students virtually, we’d love to hear from you. How are you continuing your equity practice with students? Let us know by leaving a comment below.