Add anything here here or just remove it..
By Eagle Rock,
June 20, 2018Leave a commentNews From the Rock

As a part of our 25th Anniversary celebration on June 30 here in Estes Park, Colo., a number of students are writing news articles about what shaped our school’s quarter century of successfully bringing non-traditional education to underserved, but deserving youngsters — resulting in reengaging youth in their own education.

The writing is being created as a part of a class called All Who Dared, in which students are using the techniques of journalism to discover and uncover the history of Eagle Rock School and Professional Development Center. Through interviews with our founding administrators and educators, and by digging through archival-quality documents, students in this class are collecting and presenting stories that illustrate what it was that made Eagle Rock what it is today. These researched reminisces and news stories are being compiled into a digital magazine that will be distributed later this summer. 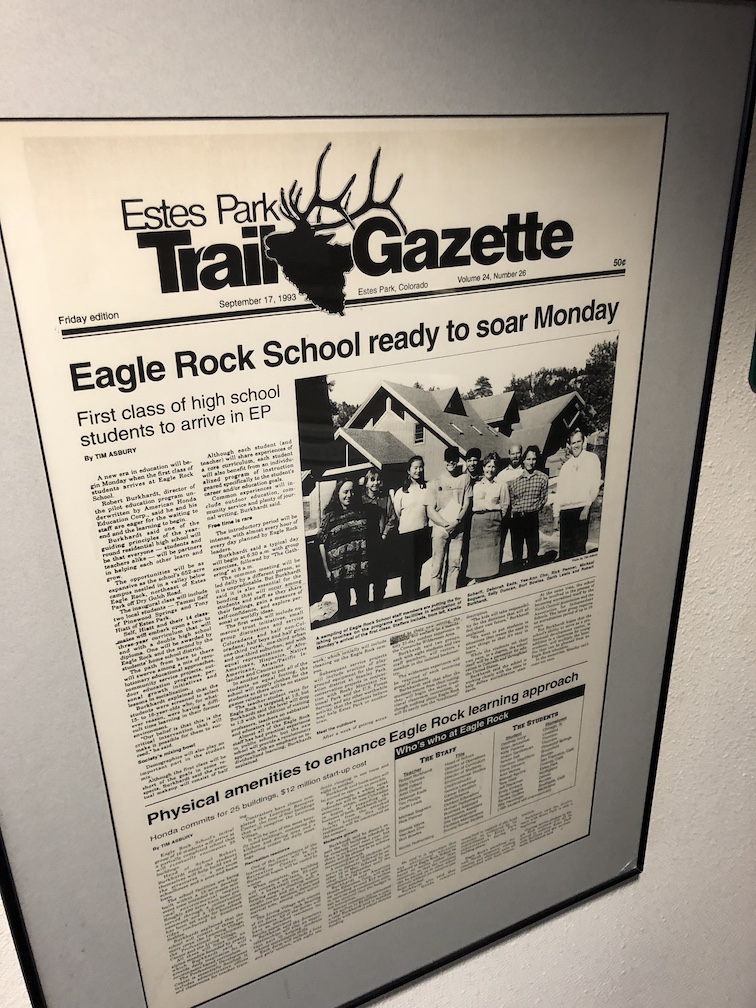 Below, we have taken excerpts from three of these writings that will appear in the online magazine. These short outtakes illustrate the work being completed by some of our students as they attempt to document their take on Eagle Rock’s history — in writing.

The Rockies. An incredible display of nature. During the winter months, its peaks are covered in white powdered snow, and during the summer, it displays tall trees and beautiful rock formations. Nestled at 7,522 feet above sea level lies a small town called Estes Park. On the outskirts of the town is a private boarding school called Eagle Rock School and Professional Development Center (ERS). Students attend for nine months out of the year on $50,000 scholarships provided by Honda. In creating Eagle Rock, Honda managed to do what it set out to accomplish — create a school that would engage the disengaged.

Creating this school was no easy feat. Honda had the resources, but no experience in education. So, the company had to look for a suitable candidate to create a team and run the school, and Robert Burkhardt fit the bill. An imposing man in his 60s with an air of confidence around him, Burkhardt was the first head of school from 1991-2012.

The dream that Honda set out to achieve has been complete in a sense by the uniqueness of ERS school and its philosophy. Through years of struggling it’s finally become a leading school in the United States with critically acclaimed teachers that bring in students from across the country who struggle in a normal school setting, to success. ERS was built through experiences from the ground up. “I had the best job in America,” Burkhardt says with a smile.

Next is a creative piece called Service to Others that was penned by student Ellis Bonin:

With 20-mile-per-hour winds rushing through his hair and the occasional bump interrupting his conversation, Myles is sitting in the back of a white pickup truck talking with me. No sweat, no panting, no sunburn evident — at least not yet. Within the next few hours Myles, along with two other students and two maintenance men, will lift a 15-foot-long wooden pole above their heads, lowering it with shaking arms into a hole in the ground. These students are spending their day adding light posts to the school’s parking lot. Getting the pole perfectly into the hole is like making a three-pointer in the last five seconds of a championship basketball game. High fives are exchanged and smiles of relief flood everyone’s faces. That lasts about 30 seconds, and then it’s on to the next pole.

These kids attend Eagle Rock, a non-profit residential school funded by Honda America, located in Estes Park, Colorado. This experiential-based high school offers a $50,000 scholarship per year to any person who is accepted. Thereafter, they are required to live by 10 commitments — one of which is, “I will serve Eagle Rock and other communities through the contribution of my labors.” The school believes that experience is just as important as “textbook” education, and thus, the school strives to incorporate “service learning” into the day-to-day lifestyle of each student who attends. Service at Eagle Rock is the rent students pay to be here; and with my experience I am more than happy to pay.

Breathing heavily with aching feet and legs, I begin the uphill trudge through the mountain road. On both sides, I am surrounded by rich green trees and grass that were lit up by golden sunshine. The large rocks on the side of the road ease into mountain formations acting as a wall for the road, and I wouldn’t be surprised to see a deer or elk bound across the road excitedly or standing off to the side as stealthily and watchful as a mouse. My skin and lungs are chilled by the shady trees and occasional breeze, but the weather promises to warm up by the time I return from the three-mile jog. On my way toward the turnaround, I pass several students, walking in groups — some of them in conversation — while others walk independently, listening to music in their earphones. Nearing the end of the jog, I cross paths with other students who have already finished, and were now jogging their way back to the school. Near the yellow cattle guard, that acts as the turnaround point, there’s a sign that reads, “Eagle Rock School and Professional Development Center.”

Eagle Rock High School is a boarding school located in the mountain valleys of Estes Park, Colorado. With a student body of no more than 72, Eagle Rock is able to fine-tune their students’ physical well-being, whether it’s through their Wednesday dedication to community intramurals, or a four-day-a-week early dawn fitness routine. Eagle Rock School’s diversity takes many forms, and one of those is creating a difference in students’ physical education.

I finish my jog and looking up, I take several deep breaths. It’s a beautifully warm and sunny morning with birds chirping nearby, and mountains in every direction. I think of the growth that has come since I first attended Eagle Rock School. I am able to jog faster and jog longer. I am able to play soccer much better, scoring more often, and becoming less tired during the rigorous running within the games. And before turning around and jogging back to school, I think of the great amount of growth awaiting me during my Eagle Rock career, and of my grace towards Eagle Rock’s dedication to students’ physical health.

Meanwhile, plans continue to be fine-tuned for our 25th Anniversary event scheduled from 9 a.m. to 7:30 p.m. on Saturday, June 30, in Estes Park. Since school is in session, parents and guests are more than welcome to participate in organized tours of classes and the mountainside campus. And of course, the event offers a perfect opportunity for Eagle Rock School alumni to see one another again, as well as meet current staff and instructors.

For more details, please look to our most recent blog post on the celebration here (Help Us Celebrate Eagle Rock’s First 25 Years).