By Jeff Liddle, Eagle Rock Head of School
December 31, 20141 CommentNews From the Rock

If you’ve never seen it, egg roulette has each person work back and forth through a dozen eggs, cracking them on their heads. Most are hard-boiled — some are not. Lodgepole came out on top, with Aspen placing second, and Spruce rounding out the top three.

Since the first trimester here at Eagle Rock, we’ve been conducting an ongoing conversation about what constitutes a safe community. Toward that end, world language instructional specialist Brighid Scanlon and student Ashalou Harrison hosted an engaging community meeting that was facilitated by JP Butler on anti-bullying.

We also had a lot of fun — and great food — over Thanksgiving with tons of activities, including Mine Craft, Crossfit, aikido, a ton of basketball, live music and a bit of swimming kept students engaged with one another and entertained. Study halls, restorative justice councils, and drug education classes all occurred in the name of student growth and development.

Spectrum (our gay/straight alliance), the African Diaspora affinity group, the budding Latino/Latina affinity group and a white awareness group created safe places for students and staff to explore the notion of identity. Jacques Fournet and Calvin King organized a group of students and staff to view the movie, “I Am Not a Racist… Am I?“. That film and the tragic loss of life of Michael Brown and Eric Gardner left us sad, angry, emotionally raw and a little uncertain about the way forward as we struggle with racial injustice.

Every Wednesday we play intramurals where houses compete against each other. During the first five weeks we played ultimate Frisbee. Piñon House came out on top in that sport with an undefeated record of 8-0. In the second five weeks of the trimester, pride was on the line as we played basketball and water volleyball. Aspen took the top seed in basketball and water volleyball with identical records of three wins and two losses. 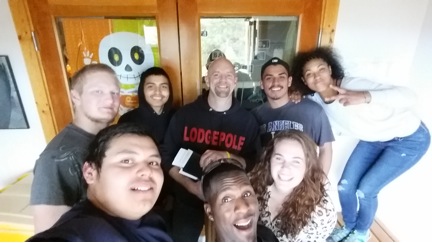 Chores, KP, thousands of conversations, some deep laughs and plenty of tears. That and much, much more. ER 64 was a busy trimester on the Eagle Rock campus.

We’re noted nationally for being all about engagement, and that goes double for our Professional Development Center team, which was busy all across the country this last trimester.

We continue our support of new schools in Albuquerque, N.M., and Reno, Nev., two states that consistently rank as among the lowest performing schools in the nation. Our objective there is to be part of the movement to turn those reputations and performances around.

We also continued our work in Burlington, Vt.; New York, N.Y.; Seattle, Wash.; and Oakland, Calif. At Eagle Rock, there isn’t a sharp line dividing our campus activities and our professional development center. All of our staff and students participate in both enterprises.

We’re of the opinion that with more than a million disengaged students in the United States, our efforts would be fairly insignificant — a drop in the ocean — were we only running a school. It is through our professional development center that we make a meaningful contribution to our nation’s youth and their right to a good education. To see upcoming projects around the country, read Eagle Rock’s PDC Has a Busy Calendar for the Cold Winter Months.)